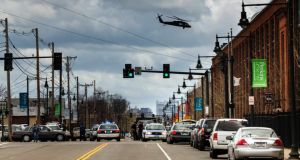 At 6am on Friday the phone rang. It was a message from the Boston police: “Lock your doors and stay inside.”

Within minutes everyone in our Newton neighbourhood – abutting Watertown – had turned on TVs to learn of the local shoot-out.

The city was in lockdown. Even the birds, as a neighbour remarked, had stayed home. Not a sound or stir in the street – apart from background sirens.

The rest of the day consisted of one big TV drama where the citizens of Boston watched themselves as characters in a script unfolding before their eyes. It was a television war but the stakes were real. Homeland Security as Homeland II .

A major American city under curfew. A “shelter in place” ban operated like a state of emergency with police and Swat teams climbing over fences and yards. Neighbours dared not cross the street. Fear yes, but above all anxiety. Who did these things? Who were these suspects? Who were friends and who were enemies? The security problem was an identity problem.

This identity crisis dominated much media commentary throughout the day. Initial reports spoke of Chechens, former residents of Kyrgyzstan, though one of the suspects had told classmates he was Russian.


‘Sweet’ and ‘good’
How and when had they arrived in Boston? Initial reports said one year, then three, then 10. One married a Brazilian, the other a scholarship boy in a top school. Described by teachers as “sweet” and “good”, they had blown the legs off bystanders days earlier. At the marathon, of all places: where Boston neighbourhoods convened in festive rite, across race and class, colour and creed.

There was a radio interview with a young man who had been in class with one of the suspects. He described his school mate as a kind friend, attending parties, texting and phoning. Just like one of “us” – yet he couldn’t be. His crime had made him one of “them”.

How had this school friend changed so utterly – from friend to enemy? How had this boy next door mutated into a prime suspect of the marathon bombing and killer of an MIT policeman?

MIT and the marathon – twin towers of Boston fame. Bastion of learning and lap of glory. Municipal icons of mind and body. The suspects in the black and white caps were unmasked as siblings who had shattered the limbs of a nation.


President in town
What is more, the president was in town. On Thursday evening, he had delivered a speech of sympathy promising that Massachusetts, cradle of America, would rediscover peace and the birds that sang matins on marathon Monday would soon return to song. The race, he said, was long and hard, but we’d finish the course. We’d come home again. The family would reunite; the wounded body heal. He spoke like a Pilgrim Father; but within hours the brothers had struck again. The American family was at risk. But who was the American family? The media were puzzled. What IDs did the killers hold? J1s? H4s? Passports? Green cards? Were the bombers alien or permanent residents? Immigrants, citizens, visitors or refugees? Or international students enjoying one of Boston’s 30 universities, like the Chinese student they had murdered at the marathon?

So what was the difference between “them” and “us”? Was it colour or race? Was it politics or ideology? But if so, which cause? Chechnya resistance? Right-wing militias? Al-Qaeda? Or, God forbid, religion?

One of the brothers was said to be “devout”. Tamerlan (after the Muslim warrior) had claimed “Islam” as his world view and his network account featured material on religious radicals.

But careful. In the media commentaries on Friday, such anxieties were only cautiously mentioned, always qualified. In the Boston climate of civic rights and multireligious tolerance, such matters were sensitive. Time would tell; or maybe the second suspect, Dzhokhar. That is why, unlike with bin Laden, it was essential this one live. The US needed to know who he was because the war was now at home, not the Tora Bora mountains of Afghanistan.

By 8pm, the second suspect was captured. Bloodied but alive, curled up with a bomb. But what could one make of it all now? How to understand?


Enigmas
Such enigmas churned in Boston minds on the day of lockdown. In a high-security zone – covering a dozen townships – citizens witnessed an urban psychodrama unfurl across their screens, many tormented by the same question: the question of pilgrims first arriving on these shores, the question of frontiersmen discerning friend from foe, the question of natives and settlers, citizens and immigrants, saints and sinners: who are those guys?

“All politics is local,” said Tip O’Neill, the Irish-American from Boston. He was right. But in this instance it was also national. It was strange to see Obama in town the same night of the shooting. So many of his policies were at stake. For how would this new bout of terror affect the president’s hopes to introduce gun control, close Guantánamo, pass immigration Bills?

The big questions lying at the heart of the US constitution were again preoccupying the minds and souls of the nation. Who is friend or enemy? Native or alien? Who are “we”? Who are “they”. And how do we live with the difference?


Richard Kearney is a
philosophy professor at Boston College