Pope Francis says Donald Trump is not a Christian 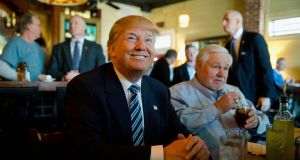 Pope Francis has questioned the Christianity of Republican presidential frontrunner Donald Trump due to his election promises to deport illegal immigrants from the US and build a wall at its border with Mexico.

The intervention by the Latin American pontiff into the US presidential race came after a six-day visit to Mexico.

The trip ended with the pontiff saying Mass at the border and laying flowers at a memorial for the migrants who have died trying to cross it.

“A person who thinks only about building walls, wherever they may be, and not building bridges, is not Christian,” Pope Francis said, when asked about Mr Trump by a reporter on board the papal jet as it returned to Rome.

The businessman supports a proposal to deport the more than 11 million illegal immigrants estimated to be living in the US and to build a “great wall” along the country’s southern border to keep migrants out.

The pontiff’s comments drew an angry response from the billionaire, as he spoke at a rally on the Kiawah Island golf resort in South Carolina, two days before the state votes in the third US presidential nominating contest.

Mr Trump said the “primary goal” of Islamic State militants was “to get the Vatican” and “that would be their ultimate trophy”.

“If and when the Vatican is attacked, the pope would only wish and have prayed that Donald Trump would have been elected president,” Mr Trump told a packed ballroom in a golf club house.

The businessman, a Presbyterian, leads the polls in South Carolina by a 16-point margin on average.

He has been trying to win over evangelical Christian voters to secure victory in the southern states.

Mr Trump escalated his criticism of the pontiff at his rally, using the kind of attacks that have characterised his bombastic campaign.

Although he told the rally that “I like the Pope”, he scolded Francis for his remarks, saying that it was “really not a nice thing to say.

“For a religious leader to question a person’s faith is disgraceful. I am proud to be a Christian,” he said.

“No leader, especially a religious leader, should have the right to question another man’s religion or faith.”

He also described Pope Francis as a “very political person”.

He accused the Mexican government of using Pope Francis “as a pawn” against him, adding that Francis “didn’t see the crime and the drug trafficking” on his visit or the “horrendous” economic impact of illegal immigration into the US.

Mr Trump has 35 per cent support against Mr Cruz on 18 per cent, the poll shows.

Florida senator Marco Rubio is in third place with 12 per cent, followed by Ohio governor John Kasich on 11 per cent.

Covid-19: The best and worst places to be in the world in the coronavirus era 13:13
Covid-19: UK leaders meet to discuss lifting restrictions for Christmas 12:57
US move to designate Houthis as terrorists ‘will cost lives in Yemen’ 10:01
Precious Charles Darwin notebooks reported stolen 08:27
Donald Trump directs team to co-operate on Biden transition 07:22