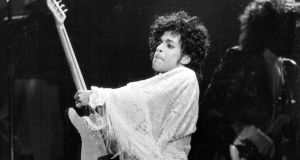 In this December 25th, 1984 photo, Prince performs at the St Paul Civic Center in St Paul, Minneapolis. Prince, widely acclaimed as one of the most inventive musicians of his era with hits including Little Red Corvette, Let’s Go Crazy and When Doves Cry, was found dead on Thursday, April 21st, 2016. File photograph: David Brewster/Star Tribune/AP 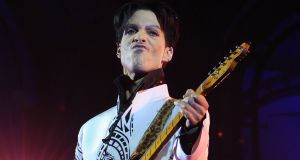 Pop superstar Prince has died at his home in suburban Minneapolis, his publicist has said. File photograph: Bertrand Guay/AFP/Getty Images.

Pop superstar Prince has died at the age of 57.

His body was discovered at his Paisley Park home in Minnesota early on Thursday, his publicist confirmed.

The Purple Rain singer was flying home from a show in Atlanta, Georgia, on April 15th when he was taken ill and his private jet made an emergency landing in Molina, Illinois.

He was taken to a nearby hospital by ambulance, where he was treated and released hours later.

At the time, a representative of the singer assured fans he was feeling much better and was resting at home.

Carver County Sheriff’s Office confirmed it was investigating the death, tweeting: “Prince Rogers Nelson (57) found dead at Paisley Park Studios in Chanhassen, MN. We are investigating the circumstances of his death.”

Audio of the emergency services dispatch call calls for paramedics to go to 7801 Audobon Road and describes a “male down, not breathing”.

Television pictures from the scene on Friday showed fans gathering across the road from his home in the rain, with a number of dark-coloured cars parked inside the Paisley Park compound.

The star was widely regarded as one of the most inventive musicians of his era and many of his songs are seen as classics.

He became an international superstar in 1982 after his breakthrough album 1999 and was most famous for hits including Purple Rain, When Doves Cry and Kiss.

The singer, who was just 5ft 2in, was also seen as an eccentric with a tendency towards bizarre career moves, such as changing his name to an unpronounceable symbol in the 1990s.

He was in the process of writing an untitled autobiography which was due to be published in 2017.

He became even more famous with the release of the film Purple Rain in 1984, a seemingly autobiographical movie set in the club scene in his home town of Minneapolis.

It was a huge success and the soundtrack album spent 24 weeks at the top of the charts and sold more than 13 million copies.

It was the first time in his career that Prince had recorded with, and credited, his backing band, which he named the Revolution.

He was fiercely protective of his independence, battling his record company over control of his material and even his name.

Prince once wrote “slave” on his face in protest at not owning his work and famously fought with and then departed from his label, Warner Bros, before returning a few years ago.

He was married twice, the first time to his backing dancer Mayte Garcia, from whom he split in 2000, and then Manuela Testolini, whom he divorced in 2006.

He was born in Minneapolis on June 7th, 1958, and is said to have written his first song at the age of 7. As well as singing and writing, he played multiple instruments, including guitar, keyboards and drums.

His music was marked by sexually charged lyrics and explosive live performances.

Among his other notable releases were Sign O’ The Times, Graffiti Bridge and The Black Album.

Prince was inducted into the Rock and Roll of Fame in 2004, where he was hailed as a trailblazer.

The dedication reads: “He rewrote the rulebook, forging a synthesis of black funk and white rock that served as a blueprint for cutting-edge music in the Eighties.

“Prince made dance music that rocked and rock music that had a bristling, funky backbone. From the beginning, Prince and his music were androgynous, sly, sexy and provocative.”

He captured the imagination of Londoners when he played 21 nights at the O2 Arena in the summer of 2007.

On his last night he declared: “Everything’s changed this summer. It doesn’t matter who came before or who comes after. From now on, the O2 is Prince’s house.”

He played a total of 504 songs to audiences of half a million.

The previous time he played in the UK was in October 2002, when he opened with a 12-minute jazz song, and berated fans who had come expecting Purple Rain.

At the O2 all that changed and he opened with his biggest hit.

In 2007, he played the Super Bowl in one of the most celebrated such performances.

His most recent album, HITnRUN: Phase Two was released in December 2015, and the artist had been on tour in the US as recently as last week.

He was in the process of writing an untitled autobiography which was due to be published in 2017.

US President Barack Obama paid tribute to the star, saying the world had lost a “creative icon”.

“Michelle and I join millions of fans from around the world in mourning the sudden death of Prince,” he wrote on Facebook.

“Few artists have influenced the sound and trajectory of popular music more distinctly, or touched quite so many people with their talent.

“As one of the most gifted and prolific musicians of our time, Prince did it all. Funk. R&B. Rock and roll. He was a virtuoso instrumentalist, a brilliant bandleader, and an electrifying performer.”

He added: “Nobody’s spirit was stronger, bolder, or more creative. Our thoughts and prayers are with his family, his band, and all who loved him.”