People of Flint poisoned by drinking water and ignored by authorities 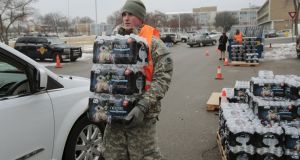 When residents of Flint, Michigan, started complaining about the taste, smell and appearance of their drinking water, officials reacted slowly to their concerns. They mocked them, belittled their complaints and deflected blame. It was a city, not a state, problem, they said.

A senior aide to the state’s governor Rick Snyder, a Republican, claimed in an email, citing environmental and health officials, that some in Flint were taking “the very sensitive issue of children’s exposure to lead and trying to turn it into a political football”. Snyder’s chief of staff Dennis Muchmore said in another email, sent in September, that an “anti-everything group” were raising the lead content of the water as an issue.

“Of course, some of the Flint people respond by looking for someone to blame instead of working to reduce anxiety,” he wrote in an email, one of more than 270 pages released this week by Snyder in response to the growing crisis. “We can’t tolerate increased lead levels in any event, but it’s really the city’s water system that needs to deal with it.”

In another internal communication, Muchmore underscored the state’s indifference to Flint: “There folks are scared and worried about the health impacts and they are basically getting blown off by us (as a state we’re just not sympathising with their plight).”

The emails tell the sorry story of the Flint water crisis that has become a subject of anger for President Barack Obama and a topic of debate in the presidential election race to succeed him.

Bernie Sanders, who is running for the Democratic presidential nomination, demanded Snyder’s resignation, saying that “a man who acts that irresponsibly should not stay in power”.

Hillary Clinton scored a big point in last weekend’s Democratic presidential debate when she mentioned Flint, lashing Snyder for acting “as though he didn’t really care” and stonewalling requests for help.

“I’ll tell you what, if the kids in a rich suburb of Detroit had been drinking contaminated water and been in it, there would’ve been action,” she said.

Clinton may have a point. About 120 kilometres north of Detroit, Flint has about 100,000 residents, of which 41 per cent live below the poverty line compared with state and national rates of 17 per cent and 15 per cent, respectively.

Almost 60 per cent of the population is black.

The problem with Flint’s water stem from a decision by a state-appointed emergency manager in April 2014 to switch its water source from Lake Huron to the cloudy Flint river until a new supply line to the lake was built. The move was a cost-saving measure taken by a city struggling to budget during a financial emergency.

The river’s corrosive water caused lead from pipes to seep into the drinking supply, contaminating the water and exposing residents to lead poisoning that researchers say could cause cardiovascular and neurological problems.

The water supply was switched back to Lake Huron in October but the damage to the city’s infrastructure was done. Even the newly elected mayor of Flint, Karen Weaver, said she and her husband stopped drinking the tap water almost two years ago.

Snyder declared a state of emergency earlier this month and Michigan National Guard has been distributing bottled water to residents. Images of bottles of brown murky water held up by residents have become commonplace.

On a visit to Detroit on Wednesday, Obama said: “I know that if I was a parent up there, I would be beside myself that my kid’s health could be at risk.” The crisis was “a reminder of why you can’t shortchange basic services that we provide to our people”, he said.

Celebrities rowed in, too, with Flint natives filmmaker Michael Moore, actor Sandra Bernhard and singer Cher joining residents to campaign for something to be done. Moore, whose documentary Roger & Me focused on the closure of the General Motors plant in the town, called for Snyder’s arrest, saying he “effectively poisoned, not just some, but apparently all of the children in my home town.”

Snyder, a two-term governor once tipped as a potential presidential contender for turning around Michigan’s economic fortunes, has seen his standing slip.

In his state of the state address on Tuesday night, he asked state legislators for $28 million (€26 million) to pay for bottled water, testing and the treatment of children affected by high lead levels.

“To you, the people of Flint, I want to say tonight, as I have before, I am sorry and I will fix it,” Snyder said. For Flint’s residents, the act of contrition from a state governor who failed one of his cities has come too late.