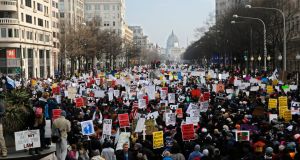 Demonstrators fill Pennsylvania Avenue as they march towards the US Capitol building during the national Justice For All march against police violence in Washington December 13th, 2014. Photograph: Reuters

Two women carried a placard with a picture of their cousin, Darryl Briston, who died of a heart attack in December 2012 after being tasered by police in Pennsylvania following a scuffle at a casino.

There was a police investigation into the death of Briston (49), an African-American former police chief from Rankin, Pennsylvania, but no charges were brought against any police officer.

“We are trying to make a change and we hope that it does change,” said Branch, one of thousands of people who marched in Washington on Saturday to protest at the recent killings of unarmed black men by white police in one of the biggest demonstrations on the issue.

Relatives of Michael Brown, the teenager shot dead in the Missouri town of Ferguson, and Eric Garner, who died after being restrained by police in Staten Island, New York, were among demonstrators who marched down Pennsylvana Avenue toward the US Capitol to call for changes to legislation to curb over-aggressive action by police.

Thousands took to the streets of New York City in a similar protest.

In Washington they carried signs saying “Black Lives Matter” and chanted “No Justice, No Peace” and “Hands Up, Don’t Shoot”, holding their hands up to re-enact the position some eyewitnesses said they saw Brown (18) in when he was shot in Ferguson on August 9th.

Protesters shouted: “I Can’t Breathe”, evoking the last words of Garner (43) who died while being held down in a choke-hold by a New York Police Department officer on July 17th.

Recent decisions by grand juries not to bring criminal charges against the officers in both cases sparked nationwide protests and reignited a debate about race and police brutality against minorities.

On Saturday protesters assembled at Freedom Plaza, near the White House, and marched to a platform near the Capitol building where they were addressed by members of the Brown and Garner families along with African-American leader Reverend Al Sharpton.

“What a sea of people,” Lesley McSpadden, Brown’s mother, told the crowd. “If they don’t see this and make a change, then I don’t know what we got to do. Thank you for having my back.”

There was a strong police presence around the streets but the protest remained calm and a peaceful. More than two dozen protesters from Ferguson and nearby St Louis interrupted the rally briefly at its starting position when they took to the stage with a bullhorn.

The rally’s organisers allowed one of the group, Johnetta Elzie of St Louis, to address the crowd. “This movement was started by young people,” she said. The group, which left the stage after she spoke, complained that the protest was a show and ineffective.

Rev Sharpton, the civil rights activist whose National Action Network organised the rally, addressed the interruption in his speech, saying: “Don’t let no provocateurs get you out of line . . . We are not here to play big shot. We are here to win.”

The crowd listened solemnly as other relatives of victims of police killings spoke from the platform calling for change and equal rights.

“It’s just so overwhelming to see all who have come to stand with us today,” she said. “I mean, look at the masses. Black, white, all races, all religions. We need to stand like this at all times.”

Among the other speakers were relatives of Akai Gurley (28), who was shot dead in New York on November 20th; Tamir Rice (12), who was gunned down by a police officer while playing with a toy pellet gun in a park in Cleveland, Ohio on November 22nd; and Trayvon Martin (17), who was killed by a neighbourhood watchman in Florida in 2012.

Leaving the demonstration, one protester, Rob Jackson from Washington DC, told The Irish Times that he believed the protests would make a difference if they continued to be consistently strong. He is fearful for his son Rashard, who accompanied him on the march.

“Our kids are always pre-judged and it shouldn’t be that way.”