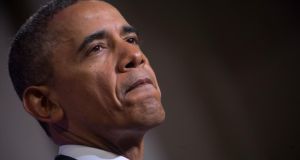 US president Barack Obama has ordered limited restrictions on US surveillance programmes to ease the anger of foreign leaders and public concerns over the sweeping intelligence practices disclosed by intelligence leaker Edward Snowden. However, Mr Obama has left the scope of the spying operations largely intact.

In a highly anticipated speech, Mr Obama defended the intelligence programmes led by the National Security Agency and refused to apologise for them, saying they had “prevented multiple attacks and saved innocent lives”, though he accepted the potential for abuse and risk of “government overreach”.

Scaling back some eavesdropping activities, Mr Obama banned the intelligence agencies from monitoring the communications of heads of state and government of close US friends and allies “unless there is a compelling national security purpose”. The ban will apply to dozens of world leaders.

The president will also adopt new privacy protections for non-US citizens. “The reforms I’m proposing today should give the American people greater confidence that their rights are being protected, even as our intelligence and law enforcement agencies maintain the tools they need to keep us safe,” he said in a speech at the department of justice in Washington DC.

The leaks by Mr Snowden, a former NSA contractor who is wanted on espionage charges in the US and is living in Russia under temporary asylum, revealed that the US was eavesdropping on the mobile communications of foreign leaders, including German chancellor Angela Merkel.

To ease concerns about privacy and civil liberties infringements, Mr Obama said the US government would no longer hold bulk phone records or “metadata”, which contains details of millions of calls, and will only be able to access the database with a judicial finding unless there is “a true emergency”.

The president did not, however, propose who should hold the information but has instead asked the US attorney general and intelligence agencies to report back to him on options before March 28th.

Independent panel
Mr Obama has asked Congress to approve the setting up of a panel of independent privacy advocates to represent the public interest in the secret intelligence court that approves spying programmes.

The move is in opposition to a former chief judge on the foreign intelligence surveillance court, who urged the president not to create a public advocate to argue against the justice department.

Rejecting most of the recommendations proposed by an advisory panel Mr Obama set up to scrutinise the intelligence programmes, the president’s plans largely centre on changes to the process of how private information is gathered and retained rather than what the dragnet picks up.

Justifying the NSA’s work, Mr Obama evoked the memory of the September 2001 attacks, mentioning “9/11” eight times in his speech.