New York to bring illegal immigrants out of the shadows 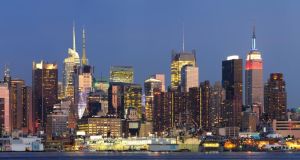 The move will be a significant boost for Irish people living and working illegally in New York City who are among the estimated 50,000 undocumented living across the United States. Photograph: Getty Images

New York City is to issue identification cards to the city’s residents, including an estimated 500,000 illegal immigrants. This will enable the so-called undocumented open bank accounts, sign rental leases and cash cheques.

It will be the biggest city ID card programme in the US.

The initiative has the backing of liberal New York City mayor Bill de Blasio who said in April that giving illegal immigrants an official form of identification would “bring dignity and peace of mind to many fellow residents currently living in the shadows”.

Allowing illegal immigrants in New York to apply for drivers’ licences, a measure that was introduced in Illinois last year, would require a new law at a higher level to cover New York State.

“The city is sending a strong message to its residents that we have your back,” New York City councilman Carlos Menchaca told The New York Times.

“These are clear messages, indicators, commitments that we mean we’re serious about how we take care of our immigrants and really all New Yorkers.”

The prospect of comprehensive immigration reform passing has been complicated further by a wave of unaccompanied child immigrants from Mexico and Central America streaming across the southern US border over the past six months.