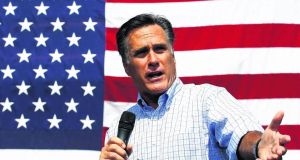 Mitt Romney, the Republican nominee in the 2012 US presidential election, told donors that he is considering seeking the GOP candidacy for 2016. File photograph: Jim Young/Reuters

It’s only the second week in January in a non-election year and 22 months until the next US presidential ballot but already the challengers for the Republican nomination are marking their intentions.

Mitt Romney, the Republican candidate in the 2012 election and a two-time contender for the nomination, startled many late last week when the former Massachusetts governor told donors in New York that he was considering running for the presidency again in 2016.

The announcement is a reversal of numerous statements Mr Romney has made since he lost to Barack Obama in 2012, saying that he had had his chance.

Mr Romney’s decision comes just weeks after Jeb Bush, the former Florida governor and the son and younger brother of former presidents, said he would “actively explore the possibility of running for president”.

This sets up the surprising prospect of a Bush versus Romney fight to be the GOP nominee, in what has traditionally been a gruelling primary battle.

The declaration by Mr Romney (67) will undoubtedly slow the fundraising efforts of Mr Bush (61), as both will tap the same Republican establishment pool for finances and support.

Mr Romney is said to be calling donors and party figures who endorsed him before to gauge support for a third run. Mr Bush, who is on a tour of the GOP base, has attempted to set himself apart, criticising Mr Romney’s 2012 campaign as he “got sucked into other people’s agendas, and I think it hurt him a little bit”.

In 2012 Mr Romney was drawn to a hard-right position on the millions of illegal immigrants in the US. It’s a contentious issue that Republicans still find little consensus on, and one on which Mr Bush, a moderate, has a better chance of winning over Hispanics, a growing electoral force.

Mr Bush is also considering the release of a decade or more of tax returns. Mr Romney was hammered in 2012 for releasing just two years of returns.

“Romney sees that if Bush is going to be the moderate in the race then he can run to the right, and he thinks there is a good opportunity for him,” said Republican strategist John Feehery.

“The big question is do Romney and Bush spend so much time and effort beating each other up that it brings in a third candidate who can slip in there and be a breathe of fresh air?”

The GOP field for the 2016 candidacy is packed, though polls so far have been run on the basis that Mr Romney is not a contender. Those polls show Mr Bush, at 17 per cent, with a six-point lead over New Jersey governor Chris Christie. These figures are based on an average of national polls by Real Clear Politics.

One of the established favourites for the nomination, congressman Paul Ryan (44), the 2012 vice-presidential candidate, said he would not seek the presidency in 2016. Mr Ryan said he wants to concentrate on his role as chairman of the influential ways and means committee in the House of Representatives.

That leaves Kentucky senator Rand Paul, former Arkansas governor Mike Huckabee and a host of other would-be contenders in the mix. This is in contrast to the Democratic side, where former first lady Hillary Clinton (68) is the probable nominee, though she has yet to announce her candidacy.

“The enthusiasm on the Republican side from so many candidates speaks a great deal to Hillary Clinton’s weaknesses as much as anything else,” said Republican strategist Rory Cooper.