Measles-like virus may be cause of over 300 dolphin deaths 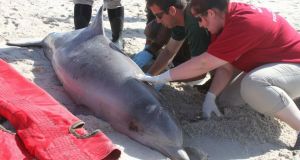 A measles-like virus that suppresses the immune system could be the reason an extraordinary number of bottlenose dolphins have died after becoming stranded along the US east coast East Coast, a panel of dolphin experts has said.

Since July 1st, 333 bottlenose dolphins have been found dead along coastlines from New York to North Carolina, the highest number in a quarter-century . It is almost 10 times the average of 33 for the same period and region over the last five years, according Teri Rowles of the National Oceanic and Atmospheric Administration.

Virginia has had the largest number of stranded dolphin deaths, with 174, Ms Rowles said yesterday. The death toll is likely higher because there have been reports of dolphin carcasses floating off the US east coast, particularly in Virginia.

Ms Rowles and other experts from NOAA, universities and marine institutes have tentatively attributed the deaths to cetacean morbillivirus, which is related to the virus that causes measles in humans.

Morbillivirus attacks dolphins’ immune systems, leaving infected animals thin and vulnerable to other diseases, including pneumonia. Many of the stranded dolphins have lesions on their skin, mouths, joints or lungs, NOAA reported.

Different kinds of morbillivirus stay within a closely related species and there is no indication this outbreak could jump to people, said Jerry Saliki of the University of Georgia.

This kind of dolphin die-off has not occurred in the mid-Atlantic region since 1987-1988. If this outbreak follows a similar course, it could last until May 2014 as dolphin populations build up resistance to the virus, Ms Rowles said.

NOAA has declared an Unusual Mortality Event, which offers support for bottlenose dolphins in this area under the US Marine Mammal Protection Act.

“At this point, there isn’t anything to stop the virus,” Ms Rowles said. While there are vaccines against morbillivirus that occurs in land animals, there is no vaccine that could be easily deployed to populations of dolphins, she said.

This month, NOAA declared an Unusual Mortality Event for bottlenose dolphins in Florida’s Indian River Lagoon, where dolphin strandings are nearly three times the historic average this year. The agency did not offer a tentative cause for these deaths, but many of the dolphin carcasses in Florida were emaciated.

“There is a tipping point in populations,” Stephanie Venn-Watson of the National Marine Mammal Foundation said. “The primary hypothesis is East Coast dolphins don’t have the natural immune response to fight off the virus.”

Asked whether pollution could be a factor, Ms Rowles said experts are monitoring an area off Georgia where there are high levels of polychlorinated biphenyls, or PCBs, in the water. PCBs were banned in the United States in 1979, but they can remain at manufacturing sites for decades and are known carcinogens, according to the Environmental Protection Agency.

No stranded dolphins have been reported along the Georgia coast, but that could change as the dolphins migrate south for the winter.

More information on the stranded dolphins is available at http://www.nmfs.noaa.gov/pr/health/mmume/midatldolphins2013.html