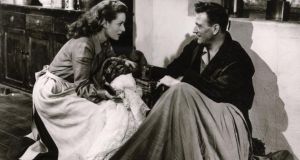 Maureen O’Hara and John Wayne in The Quiet Man 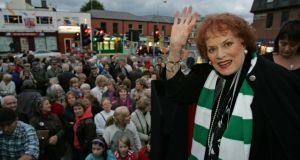 Irish screen legend Maureen O’Hara (92) has said her visit this weekend to the birthplace of her friend and acting co-star John Wayne in Iowa will be her last public appearance.

She announced the end to her public life as her family said they had hired new Irish lawyers to seek more information about her finances and assets, in Ms O’Hara’s and her family’s long-running dispute with her former personal assistant Carolyn Murphy.

Speaking from her home in Boise, Idaho, an emotional O’Hara said she was “weepy and teary” that her visit to Wayne’s birthplace in Winterset, Iowa, for the birthday celebration of his life would be her last public outing. It is “best to have the last of something”, she said.

Ms O’Hara paid a final tribute to her long-time friend, with whom she starred in five movies including the 1952 classic, The Quiet Man , which was made in Ireland. Wayne died of cancer in 1979. “He meant so much to me and all the people in the world who enjoyed his movies and his speeches and his sayings and his joking and teasing of people,” she said.

She again refused to reveal what she famously whispered in Wayne’s ear at the end of The Quiet Man , repeating that she would take one of Hollywood’s best-kept secrets with her to her grave. “I’m afraid so,” she said.

In a statement released by her grandson, Conor Fitzsimons, Ms O’Hara said that “after 75 years as a performing artist, it’s time to start taking my final bows”.

She said in an interview that she hoped her dispute with Ms Murphy could be resolved without resorting to further court action. “You hope that you won’t argue much any more,” she said.


‘Going to court’
The Irish-American actor made her comments as her grandson said that the family had hired one of Dublin’s biggest law firms, Arthur Cox, to seek more information about her business records.

“The bottom line is we are going to court,” he said.

“We have asked and requested information but we have heard nothing further for almost a year. We are going to have to go a legal route.”

Ms O’Hara left her home in Glengarriff in west Cork last year after having lived in the area since 1968. Weeks earlier she held a press conference to discuss the litigation she was embroiled in.

Mr Fitzsimons said his grandmother was living in a house near his home in Idaho under the 24-hour care of three minders. She has since sued a US lawyer in a New York court seeking the return of files on her assets and finances.

The Irish High Court ruled against a legal challenge by Ms Murphy last November seeking to reassert power of attorney over Ms O’Hara and her affairs which she held since the mid-2000s.

Ms O’Hara spoke last year of being “heartbroken” about her dispute with her long-time friend and close companion Ms Murphy.

A spokesman for Ms Murphy said at the time that she had “always acted in Ms O’Hara’s best interest” and that she was “dealing with these unfortunate affairs in the appropriate way”.