Police have used tear gas to disperse protesters in Ferguson, Missouri, in another tense night after the police shooting of a teenager. Video: Reuters 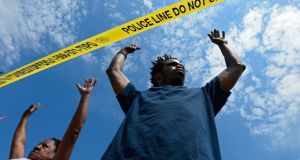 People gather outside an area where St. Louis police had blocked off where a man was shot and killed by St Louis Police after allegedly robbing a store and brandishing a knife on police. Photograph: Larry W Smith /EPA 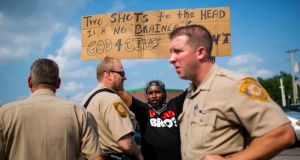 A protester holds a sign near St Louis County police officers during a demonstration in Ferguson, Missouri yesterday over the fatal shooting of Michael Brown (18) by police. Photograph: Eric Thayer/The New York Times. 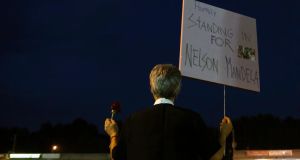 A demonstrator stands peacefully with a poster along West Florissant Avenue in Ferguson, Missouri where another evening of protest took place after the shooting death of Michael Brown by police. Photograph: Ed Zurga/EPA. 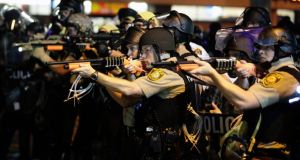 Police officers in St Louis, United States have shot and killed a 23-year-old African-American man who they say was wielding a knife and refused to drop it.

The incident happened not far from Ferguson, which has seen days of protests over the fatal shooting of 18-year-old Michael Brown by a police officer.

Police Chief Sam Dotson said officers responded to an alert at a store where the man was reported to have stolen energy drinks and a pastry.

Mr Dotson says the man was acting erratically and told responding officers to “shoot me now, kill me now.”

He says officers opened fire when the man began approaching them with the knife. KMOV reportsa large crowd gathered at the scene. No officers were injured in today’s incident.

St Louis Police Capt Ed Kuntz said police responded after a report of a robbery at the store. The suspect had a knife and refused to drop the weapon.

He said officers opened fire when the man raised the knife and moved toward them. The suspect was black.

The incident comes after US lawmakers today called for calm and a change in police tactics in the nearby St Louis suburb of Ferguson, which has been rocked by racially charged clashes and riots after a white officer killed an unarmed black teenager 10 days ago.

The violence has captured headlines around the world, raising questions about the state of US race relations nearly six years after Americans elected their first black president.

Law enforcement has made various efforts to soothe angry demonstrators, but police said they had come under heavy gunfire overnight and arrested 31 people despite the deployment of Missouri National Guard troops and the lifting of a curfew to allow protesters to have more freedom to demonstrate.

“We overpoliced for a few days, and then we completely underpoliced,” US senator Claire McCaskill, a Missouri Democrat who was traveling to Ferguson today, told cable channel MSNBC. She said she was working with local leaders on ways to quell the violence.

Possible methods include screening for weapons and moving protest areas away from the business district to open green spaces. Both she and US representative Emanuel Cleaver, another Missouri Democrat, said calm was needed to allow federal investigators to evaluate the evidence. “What’s happening now is damaging, or interfering, with what needs to be done,” Mr Cleaver told MSNBC.

Yesterday US president Barack Obama said he told Missouri Governor Jay Nixon that use of the National Guard should be limited, and he also called for conciliation.

Ferguson, a community of roughly 21,000 mostly black residents just outside St Louis, has a long history of racial tension. Blacks have complained of police harassment and under-representation in city leadership.

Tension boiled over 10 days ago after 18-year-old Michael Brown was shot dead while walking with a friend down a residential street on the afternoon of August 9th.

The police refused to immediately release the name of the officer who killed Brown. They later identified him as 28-year-old Darren Wilson but and still have not provided details about why he fired multiple rounds at Brown.

Both the US Department of Justice and the St Louis County Police Department are investigating the shooting. The county prosecutor’s office said it could start presenting evidence to a grand jury Wednesday to determine if Wilson will be indicted.

Since the killing, thousands of protesters have taken over the site of the shooting and the nearby business district each night, chanting anti-police slogans and carrying signs calling for Wilson’s arrest.

Some journalists covering the confrontations have been hit by tear gas and arrested.

Today, the Vienna-based Organization for Security and Co-operation in Europe, an intergovernmental security and human rights organization whose members include 57 countries including the United States and Canada, criticized the treatment of the journalists.

Last night, officials had hoped that the lifting of a curfew imposed over the weekend would cool tensions and end the looting and violence. Police also closed a roadway to traffic to provide a path for marchers.

But police said some in the crowd hurled bottles, rocks and petrol bombs at officers, who responded by firing gas-filled canisters and a noise cannon to try to disperse the throng.

State Highway Patrol Captain Ron Johnson, who is overseeing security in Ferguson, said officers had come under “heavy gunfire” but did not return it. Riot police did confiscate two guns and what looked like a petrol bomb from protesters. Four officers were injured, he said.

Mr Johnson separately told CNN that two people were shot within the crowd, but not by police, and were taken to hospital. There was no immediate word on their condition. “This has to stop,” said Mr Johnson, an African-American who grew up in the area. “I don’t want anybody to get hurt. We have to find a way to stop this.”

The disturbances are the worst since the angry but peaceful protests across the United States in July 2013, over the acquittal of George Zimmerman, a white Hispanic who killed unarmed black teenager Trayvon Martin during a scuffle in Florida.