Opinion: Legislation is used principally against poor and African Americans 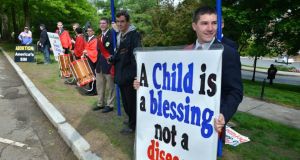 The Beltran case is just the latest episode of the US “abortion wars”.

Alicia Beltran would not be surprised by the actions of overzealous gardaí in seizing two Roma children in Dublin this week. What happened to her was not unsimilar. In July the shocked 28-year-old pregnant Wisconsin woman was dragged manacled into court after doctors decided, wrongly as it happened, that she was lying about a former addiction, could not be trusted, and that the state should take over the management of her health and pregnancy in the interest of the unborn child.

Beltran’s case, now the subject of a constitutional appeal to the US Supreme Court, marks the latest worrying skirmish in the US “abortion wars”, crucially over the deeply controversial issue of the recognition of a foetus’s legal “personhood” and its rights, separate, and, it appears, superior to the mother. The state’s right to intervene – to imprison and force medical treatment on a woman – arises because Wisconsin is one of four states, with Minnesota, Oklahoma and South Dakota, with “foetal endangerment” laws specifically granting authorities the power to confine pregnant women for substance abuse.

Other states have also used child protection or other criminal laws, often designed to protect pregnant women from attack by third parties, to confine women or force treatment on them if in such circumstances. In Alabama alone such legislation has been used at least 100 times, while a survey by National Advocates for Pregnant Women (NAPW) has recorded some 413 cases in 14 states over the last decade in which women, overwhelmingly poor and African American, were detained, arrested or forced to accept medical procedures in the name of foetal protection.

Incarceration
Among these, the centre found, were arrests and incarceration of women because they ended a pregnancy or expressed an intention to do so; of women who carried pregnancies to term and gave birth to healthy babies; of women who suffered unintentional pregnancy losses, both early and late in their pregnancies; of women who could not guarantee a healthy birth outcome; and forced medical interventions such as blood transfusions, vaginal exams, and Caesarean surgery on pregnant women.

In Beltran’s case she was also denied legal representation although she found in court her foetus had a lawyer. “I didn’t know unborn children had lawyers,” she told the New York Times , after returning to her home north of Milwaukee from a court-ordered 78-day stay at a drug treatment centre. “I said, ‘Where’s my lawyer?’”

Beltran had admitted at a routine prenatal test she had previously been a pill addict and tests showed she was substance-free. Doctors, however, would not believe her, and ordered her to take an anti-addiction drug. When she refused, the police were called in and arrested her.

Counterproductive laws
Hard cases make bad law, and the supporters of such laws argue that, in the vast majority of cases, the woman is justifiably being saved from herself and that compulsion is often the only way to deal with addicts. Not so says the NAPW, which is party to Beltran’s appeal case, and which argues such laws are medically counterproductive and can deter pregnant addicts from seeking medical care. The group warns that the measures also enable the imprisonment of women to prevent them exercising a constitutional right to abortion.

In 2011, the American College of Obstetricians and Gynaecologists insisted that “incarceration and threat of incarceration have proved to be ineffective in reducing the incidence of alcohol or drug abuse” and that mandated testing and reporting lead women to avoid prenatal care that “greatly reduces the negative effects of substance abuse during pregnancy”.

The NAPW study also revealed a significant number of deeply worrying other cases: a pregnant woman who accidentally fell down stairs and was then arrested on charges of attempted foeticide; a woman who obtained the contraceptive Depo-Provera and later had a miscarriage, then was held in jail for a year on murder charges; a pregnant woman awaiting sentencing that required probation, held in jail to prevent her from having an abortion; a pregnant woman who attempted suicide survived, but because she lost the pregnancy was arrested on charges of murder . . .

In one case a woman was convicted of homicide by child abuse after she suffered a stillbirth and tested positive for an illegal drug. All agree she had no intention of losing the pregnancy. She served eight years in prison before a court decided she received ineffective assistance of counsel.

Alicia Beltran is now at home. Her child is expected on January 15th. “I’m scared they can just come back after my baby’s born,” she told the New York Times. “This is supposed to be the happiest part of my pregnancy, and I’m just terrified.”