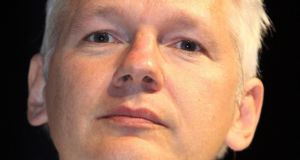 The United States was concerned in 1973 that Ireland could become “one of the more difficult” members of the European Community for it to deal with, according to the latest batch of diplomatic cables released by Wikileaks.

The whistleblower website this morning published more than 1.7 million American diplomatic records dating between 1973 and 1976.

According to Wikileaks, the cables include “significant revelations about US involvements with fascist dictatorships, particularly in Latin America, under Franco's Spain (including about the Spanish royal family) and in Greece under the regime of the Colonels.”

The documents also include many references to Ireland. In one document dated October 9th, 1973, the US embassy in Dublin assesses Ireland-US relations.

Describing them as “excellent”, the cable says “those in the power queue of both major parties are generally well-disposed toward the United States”.

While interpersonal relations were described as good but requiring “attention”, the document warns of “areas of concern that could grow worse”.

Originally classified as secret, the document warns that Ireland’s neutrality and its position in Europe could become problematic in the relationship between both countries.

"In the years ahead we expect that Ireland will be one of the more difficult members of the EC for us to deal with, specifically in the area of defense, because of Ireland's traditional neutrality; and in the reduction of agricultural trade barriers, because ireland is a major agricultural country.”

“In both these secret matters, We expect to see the Irish aligned with the French, perhaps even out in front of them, until the development of the community itself realigns its internal forces.”

The embassy was also concerned at overtures made to Ireland by Soviet minister for foreign affairs Andrey Gromyko. Following a visit to the United Nations general assembly during which Minister for Foreign Affairs Garret FitzGerald agreed with his Soviet counterpart Andrey Gromyko to an exchange of embassies, the US embassy observed:

“We expect the Soviets to do what they can to exploit Ireland's psotion (sic) as the only neutral nation in the EC and the only area in western Europe with serious civil strife. The Irish govt is aware of the problem but may not yet be equipped to cope with it.”

On Northern Ireland, the document commented on efforts to end the violence by the Irish and British governments “by political compromise” and acknowledged concerns held by the Irish government over funding for the IRA.

“Odds probably favor painful and jerky winding down of conflict. But there is still a possibility of all-out civil war, the document said.

“Even more peace-keeping troops would then be needed (there are now some 15,000 British soliders in Northern Ireland), and there would be a chance of long-term instability throughout the island.

“US security interests could then be affected, though not so directly as those of the British. Short of this civil-war scenario, the wide area of Dublin/London agreement eases our policy decisions, because we can thoroughly agree with both.

“One source of friction remains: emotional involvement of the Irish-American community in the US. For us, this merely creates some inconvenince, but the Irish are very concerned about American contributions of money and arms to the IRA.

“For the sake of both the Irish and the British, as well as for our own interests in European stability, we must do what we can to discourage contributions to violence in Ireland.”

WikiLeaks' publisher Julian Assange said the latest collection of diplomatic records "covers US involvements in, and diplomatic or intelligence reporting on, every country on Earth.

“It is the single most significant body of geopolitical material ever published.”

The collection, referred to as the “Kissinger Cables” includes 205,901 records relating to Henry A. Kissinger who served as US secretary of state during the period covered by the documents.

Thousands of the documents are marked NODIS (no distribution) or Eyes Only, as well as cables originally classed as secret or confidential.

1 Speed and distance of Covid-19 droplets tracked by Mater researchers
2 Covid-19: Seventy cases in Cork traced to local pubs and restaurants in recent weeks
3 Prepare for six months of Covid-19 restraints, warn health officials
4 Almost a third of Garda firearm discharges found to be accidental
5 No joy for consumer with a faulty Husqvana chainsaw
Real news has value SUBSCRIBE