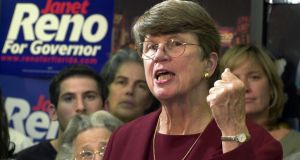 Janet Reno, the first woman to serve as US attorney general and the epicenter of several political storms during the Clinton administration, has died. She was 78. Photograph: Marta Lavandier/AP

Reno served as the top US law enforcement official under Clinton from 1993 to 2001, becoming the longest-tenured attorney general of the 20th century.

The blunt-spoken Reno authorised the deadly 1993 raid on the Branch Davidian cult compound at Waco, Texas just weeks into the job in 1993.

She later authorised the 2000 seizure by federal agents of six-year-old Cuban shipwreck survivor Elian Gonzalez from relatives in Miami, as well as the government’s huge anti-trust case against Microsoft in 1998.

The former Miami prosecutor, who was picked by Clinton only after his first two choices for the job ran into trouble, exhibited an independent streak and a brusque manner that often upset the White House.

In 1995 Reno was diagnosed with Parkinson’s disease, a progressive disorder of the central nervous system that caused trembling in her arms. “All it does is shake and you get used to it shaking after a while,” she told a TV interviewer.

Reno was attorney general throughout Clinton’s two terms as president and was in the job longer than anyone except William Wirt, who held it from November 1817 until March 1829.

After leaving Washington, Reno returned to Florida and ran for governor in 2002, but lost in the Democratic primary.

Reno was born on July 21st, 1938, in Miami to parents who were newspaper reporters. She attended public schools in Miami and earned a chemistry degree at Cornell University in 1960.

She received her law degree from Harvard three years later and worked as a lawyer in Miami.