Airline says mechanical failure did not appear to be a factor, as black boxes recovered 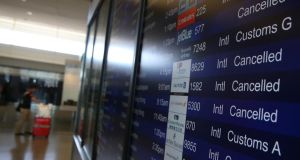 There was no immediate indication of the cause of Saturday’s crash but Asiana said mechanical failure did not appear to be a factor. The airline declined to blame either the pilot or the San Francisco control tower.

Eric Weiss, a spokesman for the National Transportation Safety Board (NTSB), said the aircraft’s “black boxes” – the cockpit voice recorder and flight data recorder – had been recovered and were sent to Washington for analysis.

The Federal Aviation Administration also was investigating and Asiana Airlines said yesterday that Korean accident investigators were on their way to San Francisco.

Scheduled construction
A component of the airport’s instrument landing system that tracks an incoming aircraft’s glide path has been out of service in recent weeks due to scheduled construction and was not working on Saturday, an airport spokesman confirmed.

Pilots and air safety experts said the glide path technology was far from essential for a safe landing in good weather, but would likely be a subject of the inquiry.

NTSB chairman Deborah Hersman said there was no indication of a criminal act but it was too early to determine what went wrong.

“Everything is still on the table,” she said on NBC’s Meet the Press.

At least five people were still being treated at other area hospitals yesterday morning.

Some of the injured at San Francisco General suffered spinal fractures, including paralysis, and others had head trauma and abdominal injuries.

The dead were identified as Ye Meng Yuan and Wang Lin Jia, both 16-year-old girls and described as Chinese nationals who are students, Asiana Airlines said. They had been seated at the rear of the aircraft, according to government officials in Seoul and Asiana, and were found outside the aircraft.