Hurricane Florence begins to batter the US

The National Weather Service warns that Florence, now a Category 2 hurricane, is likely to bring “life-threatening, catastrophic flash flooding and significant river flooding” when it hits the east coast of the United States. Video: NOAA, NASA 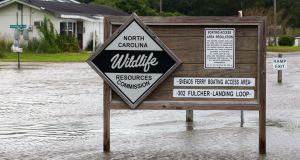 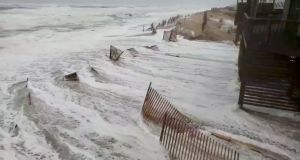 The US is bracing itself for its biggest hurricane so far this year.

Heavy rains and winds began to lash the outer banks of North Carolina and the southeastern coast of the state on Thursday afternoon. The eye of the storm is predicted to make landfall on North Carolina’s southern coast on Friday, when it is expected to slow considerably, potentially dumping tonnes of water on North and South Carolina.

The hurricane is expected to deliver up to eight months of rain over a three-day period.

As of Tuesday, more than 1.7 million people in the Carolinas and Virginia were warned to evacuate.

Forecasters worried the storm’s damage will be all the worse if it lingers on the coast, as predicted.

The White House said that the US president Donald Trump was monitoring the hurricane from the White House and was receiving updates from authorities. He spoke with senator Thom Tillis of North Carolina, and mayor Bill Saffo of Wilmington, a town which is expected to be badly hit.

“I was just briefed on Hurricane Florence. FEMA, First Responders and Law Enforcement are supplied and ready. We are with you!” the president tweeted after discussions with officials, attaching a satellite image of the storm.

Watch out, America! #HurricaneFlorence is so enormous, we could only capture her with a super wide-angle lens from the @Space_Station, 400 km directly above the eye. Get prepared on the East Coast, this is a no-kidding nightmare coming for you. #Horizons pic.twitter.com/ovZozsncfh

While Hurricane Florence had been downgraded to a Category 2 storm with 165km/h winds, it remained life-threatening, officials said.

Federal Emergency Management Agency (Fema) administrator Brock Long explained that, though the storm’s winds had eased, its wind field had expanded, with the result that a much greater area would be exposed to the storm. Rain predictions would also remain the same, he said.

“This is a very dangerous storm,” said Mr Long. “Inland flooding kills a lot of people unfortunately and that’s what we’re about to see.”

Governor Roy Cooper of North Carolina echoed these warnings, urging people who had not evacuated to leave the area.

“We cannot underestimate this storm.

“Wind speeds may have dropped some from yesterday, but we traded that for a larger wind field that expands 200 miles with tropical-storm-force winds.”

He said: “Hurricane Florence was uninvited but she’s just about here anyway.

“My message today: Don’t relax. Don’t get complacent. Stay on guard. This is a powerful storm that can kill. Today the threat becomes a reality.”

Georgia, Virginia and North and South Carolina have all declared states of emergency over the hurricane.

Florence could bring wind-driven storm surges of seawater as high as 4m, and National Hurricane Centre director Ken Graham said on Facebook these surges could push in as far as 3km inland.

Heavy rains were also forecast to extend into the Appalachian mountains, affecting parts of Alabama, Tennessee, Kentucky and West Virginia.

Duke Energy, the primary power supplier for North and South Carolina, warned that up to 3 million customers could be without electricity as a result of the storm, while restoring electricity could take several weeks.

Some 11,000 power outages have already been reported in North Carolina.

As new forecasts showed the storm’s path appeared to be more southerly than anticipated, some residents who had thought they were safely out of range boarded up their homes. Additional reporting: – Reuters/AP