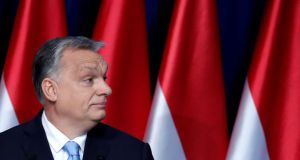 Hungarian prime minister Viktor Orban has said he may join forces with Poland’s ruling nationalists if his Fidesz party leaves or is expelled from the centre-right European People’s Party (EPP) in a row over his increasingly radical rule.

Fine Gael is one of 13 EPP members that want Fidesz to be excluded from the group this month, and Mr Orban’s party has sent mixed messages over whether it will seek compromise or stand its ground ahead of European elections in May.

The EPP has faced growing pressure to respond to Mr Orban’s expansion of government influence over Hungary’s law courts and media, and his hard-line policies that target refugees and migrants, NGOs and the liberal Central European University founded by Budapest-born billionaire George Soros.

Mr Orban said on Friday that Fidesz wants “to preserve Christian culture and protect borders” but had been “attacked by pro-immigration forces” in the EPP that prefer to “build a Europe with a mixed population and bring in migrants”.

He told Hungarian radio that he would like to reform the EPP so “there is room inside it for anti-immigration forces like us” but admitted that “the debate may end up with [Fidesz] finding its place not within but outside” the group.

“If we need to start something new, then obviously the first place we’ll start talks will be Poland, ” he added.

Fidesz shares Eurosceptic, anti-immigration views with Poland’s ruling Law and Justice Party, and they have pledged to shield each other from any punishment that results from EU investigations into their alleged attacks on the rule of law.

Since building border fences to bar refugees and migrants from Hungary in 2015, Mr Orban has ploughed tens of millions of euro in taxpayers’ money into a constant anti-immigration campaign in the Hungarian media.

He has become a leader of rising nationalist, populist forces in Europe, and says migration will be the key issue in May’s European elections, which he hopes anti-immigration parties will win as part of a right-wing takeover of EU institutions.

Mr Orban has called far-right Italian interior minister Matteo Salvini a “hero” and praised him for launching talks with Polish leaders on the possible creation of a new nationalist group to contest the European elections.

“The Polish-Italian or Warsaw-Rome alliance is one of the greatest developments that this year could have started with . . . There should be a Rome-Warsaw axis, which is able to govern, is responsible and is against immigration and is willing to work together with the anti-immigration forces within the EPP,” he said in January.

“We are a political family of values . . . that has common ideas, and everybody who is based on these common ideas can stay,” EPP leader Manfred Weber said on Friday.

“Others can leave or must be kicked out if this is not accepted anymore.”