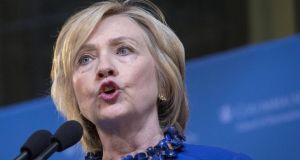 Potential Democratic presidential nominee Hillary Clinton at Columbia University in New York. Ms Clinton has voiced her support for immigration reform in the US during a fundraising function. Photograph: Brendan McDermid/Reuters

America’s immigration problem needs to be addressed, in a way that helps families, potential Democratic presidential nominee Hillary Clinton has said, in a speech that will appeal to illegal Irish in the US.

Ms Clinton told donors at a private fundraising function in New York that it was a shame the comprehensive immigration reform bill that passed the US Senate with cross-party support in 2013 was never put to a vote in the Republican-controlled House of Representatives.

She said it was a shame that the bill, which included a measure granting 10,500 new “E3” working visas to Irish immigrants, stalled in Congress.

These comments were in reference to Republican Speaker of the House John Boehner, according to those with knowledge of the speech.

The fundraising event, one of three held in New York as part of Ms Clinton’s fledgling presidential campaign, took place at the midtown Manhattan home of Arne Glimcher, the septugenarian art dealer and film producer, and his art curator wife Milly.

Ms Clinton acknowledged the presence of several Irish “friends” at the event.

She is due to attend another fundraiser at the Washington DC home of Irish-American diplomat Elizabeth Bagley.

The former secretary of state and New York senator announced her intention to run for president on April 12th, becoming the first Democrat to declare a candidacy for 2016.

She has been building up her campaign through a “ramp-up” phase, meeting voters at low-key events in the pivotal states of Iowa and New Hampshire, as well as donors.

The former first lady was criticised during her first presidential campaign in 2008 for being lukewarm on immigration reform, and hesitated in her support for a failed compromise immigration bill in 2007 that would have benefited the estimated 11 million illegal immigrants in the US.

She experienced a set-back during a 2008 campaign debate in Philadelphia, when she wavered on whether she would grant driver’s licences to illegal immigrants if she was elected president.

Ms Clinton later released a statement defending her support for immigration reform but said she would “not support driver’s licences for undocumented people”.

Former Maryland governor Martin O’Malley, who is expected to announce his candidacy next month, recently criticised Ms Clinton for shifting her position on the issue.

Mr O’Malley enacted a law in Maryland in 2013 that expanded the ability of illegal immigrants to obtain driver’s licences.

Immigration will be a critical issue in the 2016 race for the White House, given the role the immigrant vote played in the re-election of president Barack Obama in 2012.

In November, Ms Clinton backed Mr Obama’s executive actions bypassing Congress to help millions of illegal immigrants, including thousands of Irish who are unable to travel back and forth to Ireland, by granting a reprieve from deportation.

A court action taken by Republicans has since blocked those measures.

Ms Clinton said she supported Mr Obama’s decision “to begin fixing our broken immigration system” and blamed an “abdication of responsibility” by the House of Representatives for the need for his executive actions.