Hillary Clinton turns to comedy to win back millennials

Democrat’s support among young voters, a key part of the Obama coalition, has slumped

US presidential nominee Hillary Clinton follows in the footsteps of Barack Obama, among others, by appearing on internet comedy show 'Between Two Ferns With Zach Galifianakis'. Video: Funny or Die 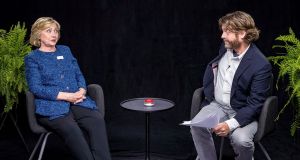 Hillary Clinton and Zach Galifianakis: “What happens if you become pregnant? Are we going to be stuck with Tim Kaine for nine months?” Galifianakis asked the Democratic candidate. Photograph: Funny or Die

Hillary Clinton grinned awkwardly at times through her interview with comedian Zach Galifianakis on the new episode of his internet parody chat show Between Two Ferns.

“What happens if you become pregnant? Are we going to be stuck with Tim Kaine for nine months?” Galifianakis, star of The Hangover movies, asks Clinton. The actor plays an antagonising foot-in-mouth host, brilliantly posing a series of embarrassing questions in the sort of skit that has made his show on the Funny or Die website a viral hit among social-media consuming millennials.

“Well, this has been a lot of fun, Mrs Clinton. We should stay in touch. What’s the best way to reach you? Email?” Galifianakis says, wrapping up. The candidate offers no reaction.

The Democratic presidential nominee’s decision to present a lighter side to a younger audience is not a surprise given her dreadful poll numbers among those voters.

Polls, both nationally and in the all-important swing states, have shown Clinton’s support among voters younger than 35 slumping in the past month, particularly when the Libertarian candidate Gary Johnson and the Green Party candidate Jill Stein are considered.

Polls by Fox News and a local survey in Michigan, a battleground for Trump’s blue-collar message, showed Clinton’s lead among young people falling by a similar margin.

This week’s NBC News/Wall Street Journal poll showed that voters under 35 are turned off by the election. Only half of that age group surveyed in the poll ranked their interest in the election at a nine or 10, on a scale of 1 to 10, compared with 68 per cent of the general population.

Reflecting the unpopularity of the two main-party nominees, the poll showed that younger people are more likely to vote for the third-party candidates: Johnson received 17 per cent support among younger voters, while Stein had the backing of 5 per cent.

Clinton is lagging behind Barack Obama’s performance among young people, a key part of his winning coalition. He beat Republican nominee Mitt Romney among these voters by 29 points in 2012 and John McCain by an even bigger margin, 34 points, according to exit polls.

The figures explain why the Clinton campaign has leaned heavily on recent stump appearances by Obama, first lady Michelle Obama, Bernie Sanders and Massachusetts senators Elizabeth Warren, who show much higher approval ratings than the former secretary of state.

Other figures that jump out from recent polls show not just the lack of enthusiasm for Clinton but reflect the perceived flaws in her candidacy.

Trump, remarkably for a candidate who scores so poorly on fact-checking exercises, is viewed as being more honest and straightforward: the NBC/Wall Street Journal poll found just 31 per cent voters consider Clinton as such, compared with 41 per cent for him. She leads him, however, by 33 points when it comes to having the right temperament for being president.

In other words, most Americans don’t trust her but still believe she would be a better president. This is a symptom of having two of the most unpopular candidates running in a modern election.

“Her Achilles heel is trust and honesty. The reality is that that impression has sunk in and there is going to be very little she can do to change that,” said Democratic strategist Brad Bannon.

“Her big advantage is that she has crossed that threshold as commander-in-chief: people may not like her but even people who don’t like her believe she will be a strong and determined leader.”