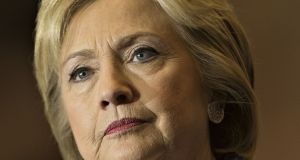 Hillary Clinton: with less than two weeks before the first ballots of the election are cast in Iowa, Clinton, who promised she would “work for every vote” is having to do just that. Photographer: Daniel Acker/Bloomberg

Democratic presidential candidate Hillary Clinton stepped up her attacks on rival Bernie Sanders as a new poll gave him an eight-point lead in Iowa, the first state to vote in just over a week.

Campaigning in the midwestern state that holds its caucuses on February 1st, Ms Clinton sharpened her tone, questioning whether Mr Sanders’s ideas can be enacted.

She lashed the Vermont senator, continuing to paint him as an idealist in contrast with her record as a pragmatic politician. At a rally on Thursday, she said that she was “not interested in ideas that sound good on paper but will never make it in the real world”.

While they “share many of the same goals,” Ms Clinton said, they have “different records and different ideas on how to drive progress.”

The self-described democratic socialist fared better among Democrats on economic policy and support for the middle class. They preferred the former secretary of state on foreign policy.

Ms Clinton made this one of her main lines of attack at a rally at a liberal arts college in Indianola, Iowa. She said Mr Sanders was weak on foreign policy and “hasn’t thought it through” on a number of issues, including Iran.

“He has suggested that we invite Iranian troops into Syria, ” she said. “That is like asking the arsonist to be the firefighter.”

Hammering the senator on his policies from healthcare to gun control and on his electability in November’s general election, Mrs Clinton warned Iowans that his plans for a universal government-funded healthcare system would lead to “gridlock” in Washington.

The Sanders campaign attributed her attacks to the latest poll numbers in a state where she was once expected to win easily.

“At a time when secretary Clinton’s lead is evaporating in Iowa, we understand why her campaign is panicking and saying absurd things,” said Mr Sanders’s campaign spokesman, Michael Briggs.

“The people of Iowa showed extraordinary courage in 2008 by voting for Barack Obama over Hillary Clinton,” he said, “and many Iowans now understand that it’s too late for her brand of establishment politics.”

Former US president Bill Clinton, canvassing for his wife in the early voting states, dismissed Mr Sanders with faint praise for his insurgent campaign that has energised grassroots liberals.

“This other guy’s madder than she is,” Mr Clinton said at a campaign event on Thursday night in Nevada, the third state to vote next month. “And that feels authentic.

“And besides, his slogans are easier to say. I say that with no disrespect. I admire him.”