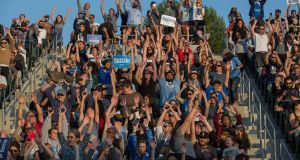 Supporters of Senator Bernie Sanders attend a rally in Carson, California, last week. “The 2016 race is transcendentally bizarre. We have two near-nominees with the highest unfavourables at this point in the race of any in modern history.” Photograph: Monica Almeida/New York Times

Hillary Clinton is the Democratic nominee. Really. Just ask her.

She should have been able to finally savour shattering that “highest, hardest glass ceiling” – the one she gloried in putting 18 million cracks in last time around – when she attends her convention in Philadelphia in July. Instead, she is reduced to stomping her feet on CNN, asserting her dominance in a contest that has left her looking anything but dominant.

Once more attempting to shake off the old socialist dude hammering her with a sickle, Clinton insisted to Chris Cuomo on Thursday: “I will be the nominee for my party, Chris. That is already done, in effect. There is no way that I won’t be.”

It’s a vexing time for the Clintons. As Bill told a crowd in Fargo, North Dakota, on Friday, it’s been an “interesting” year: “That’s the most neutral word I can think of.” After all, why should Bernie Sanders get to be the Democratic nominee when he isn’t even a Democrat? And how is Donald Trump going to be the Republican nominee when he considers being a Republican merely a starting bid?

It must be hard for Hillary to look at all the pictures of young women swooning over Bernie as though he were Bieber. She assumed that the fix was in, that she and the DNC had arranged for the coronation she felt she was robbed of in the tulip craze of 2008.

Everyone just laughed when Sanders, a cranky loner from Vermont with a nondescript Senate record, decided to challenge Queen Hillary. Clinton and her aides intoned – wink, wink – that it would be healthy to have a primary fight with Sanders and Martin O’Malley.

But Bernie became the surprise belle of his side’s revolutionary ball. And now he has gotten a taste of it and he likes it, and he won’t let it go. He’s bedeviling the daylight out of Hillary. Hillary and her allies are spinning a narrative that Bernie is less loyal to the Democratic cause than she was with Obama. And Trump does delight in quoting Bernie’s contention that Hillary lacks the judgment to be president.

On Friday, when he accepted the endorsement of the NRA at its convention, Trump mischievously urged Sanders to run as a third-party candidate and said he would love to have a debate with both Hillary and Bernie onstage.

Hillary says Sanders needs to “do his part” to unify the party, as she did in 2008. But even on the day of the last primaries in that race, when she was the one who was mathematically eliminated unless the superdelegates turned, she came onstage to Terry McAuliffe heralding her as “the next president of the United States”. She then touted having more votes than any primary candidate in history as her fans cheered “Yes, she will!” and “Denver! ”

Seeing Trump’s soaring negatives, Sanders thinks if he could just get past Hillary, he could actually be president. The Bernie bro violence – chair throwing, sexist name-calling and feral threats – at the Nevada state party convention last weekend was denounced as “a scary situation” by his Senate colleague Barbara Boxer. Sanders condemned the violence while stoking the outrage, urging the Democratic Party to “open the doors, let the people in”.

He flashed a bit of Trump, so sure in his belief the system is rigged that he fed off the nasty energy. Boxer had to call Sanders several times before he called back. She and other Democratic Senate women are fed up with his crusade, feeling enough is enough. I’ve talked to several former Clinton and Obama White House aides who don’t enjoy checking in with the joyless Clinton campaign in Brooklyn. “It’s the Bataan Death March,” one says.

Hopeful acceptance of Hillary has shifted to amazed disbelief that she can’t put away Bernie. Given dynasty fatigue and Hillary’s age, many Democrats assumed that their frontrunner would come out of the gate with a vision for the future that gave her campaign a fresh hue, instead of white papers tinkering around the edges. She should have been far over her husband’s bridge to the 21st century and way down the highway by now.

Instead, her big new idea is to put Bill in charge of the economy again (hopefully, with less Wall Street deregulation). Again with the two for the price of one. And please don’t deny us the pleasure of seeing Bill choose the china patterns.

Hillary’s Bataan Death March is making Republicans reconsider their own suicide mission with Trump. More are looking at Clinton’s inability to get the flashing lights going like her husband, and thinking: Huh, maybe we’re not dead here. Maybe Teflon Don could pull this off.

The 2016 race is transcendentally bizarre. We have two near-nominees with the highest unfavourables at this point in the race of any in modern history. We seem to have a majority of voters in both parties who are driven by the desire to vote against the other candidate, rather than for their own.

US Democrat*  Debbie Wasserman Schultz tries to herd young women to Hillary by raising the spectre of Roe v Wade being overturned. And former Democratic Pennsylvania governor Ed Rendell said Trump’s obsession with “10s” and D-cups would “come back to haunt him” and give Democrats wins because “there are probably more ugly women in America than attractive women”.