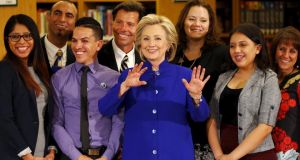 When Hillary Clinton sets out her stall on a major policy issue, her Republican rivals tend to respond quickly and aggressively, such is her perceived strength as the likely Democratic presidential nominee in 2016.

Speaking to a largely Hispanic audience at a high school in Nevada this week, she came out categorically in support of comprehensive immigration reform, a lightning-rod issue in US politics on which she has wobbled in the past, mostly notably during her failed 2008 presidential bid.

All that has changed because, well, America has changed and Clinton, knowing how Barack Obama’s 67 per cent and 71 per cent shares of the Hispanic vote helped him win in 2008 and 2012, must offer the same kind of appeal if she is to take the White House.

On Tuesday’s visit to Las Vegas, the 67-year-old politician left no doubt about her position on immigration: she wants a full path to citizenship for the estimated 11 million illegal immigrants (including, it is estimated, thousands of Irish).

Clinton chided Republicans for supporting a watered-down solution – legal status rather than full citizenship – which, she said, would create “second-class status” for immigrants.

This reflects the acrobatic pivot the party must perform, first rejecting anything perceived as amnesty by the white conservative voters who pick the party’s nominee and then softening this stance if they have any chance of beating the Democrat in the election.

Wisconsin governor Scott Walker, who has a strong lead among Republicans in conservative Iowa, the first nominating state in next year’s elections, shot back saying Clinton’s “full embrace of amnesty is unfair to hardworking Americans”.

For Rubio, the son of Cuban immigrants, the issue is particularly tricky. He co-authored the 2013 bipartisan Senate Bill that would put illegal immigrants on a 13-year pathway to full citizenship.

The Bill stalled in the Republican-led House of Representatives and Rubio disowned it after seeing the opposition from conservatives in his own party.

Clinton’s choice of Nevada, the fourth state to nominate party candidates in 2016, to nail her position on immigration to the electoral door is significant. The state is a microcosm of the nationwide battle Obama won and that other candidates must replicate. Hispanic voters represent almost a fifth of Nevada’s electorate and they voted for him by a margin of almost three-to-one in 2012.

Nationally, Hispanics account for about 17 per cent of the population and are expected to reach about 25 per cent in 2044, according to William Frey, a demographer and senior fellow at the Brookings Institution, the Washington, DC-based think tank.

At that point, the country will be a “majority minority” nation. In other words, in less than three decades, the white population will no longer be in a majority and there will be no racial majority. Frey attributes this to a higher birthrate among Hispanics and the slowing population growth among the white population.

A more immediate change shaping party policies is the internal migration of minorities. The movement of African-Americans south has helped make the Democratic Party more competitive in states such as Virginia, North Carolina and Florida.

Georgia, a traditionally ruby-red Republican state where metropolitan areas such as Atlanta are a magnet for African-Americans relocating from the north, could become another battleground state, says Frey.

In Texas, the eligible voting population will be less than 50 per cent white by 2020 but what keeps the state from changing from red to blue is the existence of persistent older and, in some cases younger, white voters who loyally opt for Republican candidates by a large margin.

It is this white voter base nationally that stops Republicans from appealing too much to minorities, such as in Rubio’s case. As the population continues to change, however, the pressure on Republicans to broaden their appeal to these ethnic voting groups will rise.