Hillary Clinton celebrates as she becomes the first female in US history to be a be major party nominee for president, while Bernie Sanders vows to fight until the end. Video: Reuters 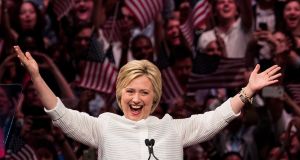 Hillary Clinton claimed victory in the Democratic presidential primary last night, becoming the first woman in the 240-year history of the United States to claim the nomination for a major political party in the race for the White House.

Shortly after being declared the winner in New Jersey’s primary, a victory that cemented her status as the presumptive nominee, Mrs Clinton took the stage at the Brooklyn Navy Yard near her campaign headquarters and framed her victory in historic terms and as a watershed moment for women.

“Tonight caps an amazing journey - a long, long journey,” the second-time presidential candidate told thousands of supporters, placing her candidacy in the struggle and sacrifice for women’s rights going back more than 150 years.

Speaking under a glass ceiling of a renovated Brooklyn warehouse, Mrs Clinton evoked her famous speech about “18 million cracks” in the “highest, hardest class ceiling” from eight years ago when she conceded defeat to the then US senator Barack Obama.

“We are all standing under a glass ceiling right now. But don’t worry. We’re not smashing this one,” she said, savouring the landmark moment.

“Thanks to you, we’ve reached a milestone. For the first time in our nation’s history, a woman will be a major party’s nominee for president of the United States.”

To her right, supporters held up letters spelling out “History” and a sign that read: “Caution: Shattered Glass” contributing to the history of the moment.

The former US secretary of state added victories in South Dakota, New Mexico and North Dakota.

On Wednesday Hillary Clinton won the Democratic presidential primary in California - a state her rival, Vermont senator Bernie Sanders, was hoping to win to extend the campaign to next month’s convention.

Mr Sanders however has refused to concede defeat, telling raucous supporters at a rally in California that he planned to continue his campaign to the last Democratic primary in Washington next Tuesday and take his “fight for social, economic, racial and environment justice” to the convention in Philadelphia.

“I am pretty good at arithmetic and I know that the fight in front of us is a very, very steep fight but we will continue to fight for every vote and every delegate we can win,” said the senator.

The New York native won the primaries in North Dakota and Montana but the victories leave him well short of Mrs Clinton’s strong lead among delegates.

He concluded his shorter-than-usual speech telling the crowd in Santa Monica: “Thank you all - the struggle continues.”

President Barack Obama called both Mrs Clinton and Mr Sanders, according to a statement from the White House.

He congratulated Mrs Clinton “for securing the delegates necessary to clinch the Democratic nomination for president” and Mr Sanders “for energising millions of Americans with his commitment to issues like fighting economic inequality and special interests’ influence on our politics.”

They plan to discuss “the significant issues at stake in this election that matter most to America’s working families,” the president’s press secretary said.

In her speech in Brooklyn, Mrs Clinton offered an olive branch to Mr Sanders and voters fired up by his populist campaign, acknowledging his unexpected groundswell of support that made the primary a bruising affair and congratulating him “for the extraordinary campaign he’s run.”

“He has spent his long career in public service fighting for progressive causes and principles an excited millions of people, especially young people,” she said.

In a nod to a brutal five-month general election campaign ahead, she pivoted to presumptive Republican nominee Donald Trump, repeating her claim that he is “temperamentally unfit” to be president and decrying his polarising rhetoric.

“He’s not just trying to build a wall between America and Mexico. He’s trying to wall off Americans from each other,” she said.

She lambasted the billionaire property mogul for questioning the independence of the Hispanic judge overseeing a fraud lawsuit against Trump University, which has led to a chorus of condemnation from Republicans.

“We should lift each other up, not tear each other down. To be great, we can’t be small. We have to be as big as the values that define us,” she said.

Mr Trump, meanwhile, wrapped up the Republican primary with victories in New Jersey, South Dakota, New Mexico, California and Montana, concluding a race that he won last month when the last of his opponents dropped out.

He trained his focus on his election fight against Mrs Clinton in a speech at one of his golf courses in Westchester outside New York City. Unusually for the reality-TV star, he used teleprompters to deliver his remarks.

Mr Trump took aim at Mrs Clinton, saying that the former secretary of state and her husband, former president Bill Clinton, had “turned the politics of personal enrichment into an art form for themselves.”

He accused them of “selling access, selling favours and selling government contracts” to enrich themselves and that she used “a totally illegal” private email serve to keep her “corrupt” dealings hidden from the public.

“We’re only getting started and it’s gonna be beautiful,” he said, signalling the general election fight ahead against his Democratic rival.

Mrs Clinton’s victories in at least three of the six states voting on the last day of multi-state contests in the Democratic primary and her stronger-than-expected performance in California have dealt a devastating blow to Mr Sanders.

The democratic socialist had hoped to make a symbolic last stand in the Golden State, the biggest prize on the night with the most delegates at stake in the Democratic race, with a view to strengthening his case to super-delegates - party insiders - to back him as the stronger candidate against Mr Trump.

Mrs Clinton’s victories are expected to leave her with a majority of the pledged delegates - a position that weakened Mr Sanders’s plan to convince super-delegates, who support his rival in such large numbers, to flip.

The New York Times reported that the 74-year-old senator planned to lay off at least half of his campaign staff today.

“I think he should step out and let Hillary and all of us fight against Donald Trump because he can never be president of this country,” said Norma Castillo (55), a New Yorker originally from Nicaragua, at the Clinton event.

“This is what a good Democrat should do. Even though he doesn’t agree with many things that Hillary stands for. One thing is very clear: we cannot let Donald Trump be president of this country.”

Jen Shoemaker (35), a writer from New York, left the Clinton rally with a bounce her step against the backdrop of the Manhattan night skyline.

“We are blessed. This is never going to happen again,” she said.

“We made history tonight.”