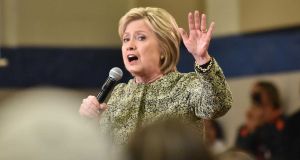 Democratic presidential candidate Hillary Clinton speaks during a campaign event in Illinois, the US. Photograph: John Starks/Daily Herald via AP

In the days since her death on Sunday, Nancy Reagan has been praised for her work on a range of causes, from preventing drug abuse to supporting research into Alzheimer’s disease.

However, on Friday, Democratic presidential candidate Hillary Clinton praised Reagan as a force in confronting HIV/Aids, which was killing alarming numbers of gay men and others during her husband Ronald Reagan’s two terms as US president.

“It may be hard for your viewers to remember how difficult it was for people to talk about HIV/Aids back in the 1980s,” Ms Clinton told MSNBC’s Andrea Mitchell.

“And because of both president and Ms Reagan, in particular Ms Reagan, we started a national conversation, when before nobody would talk about it. Nobody wanted anything to do with it.”

The problem with Clinton’s compliment: It was the Reagans who wanted nothing to do with the disease at the time.

She faced a swift and fierce backlash, and issued a contrite apology within hours.

“While the Reagans were strong advocates for stem cell research and finding a cure for Alzheimer’s disease, I misspoke about their record on HIV and Aids,” she said in a statement. “For that, I’m sorry.”