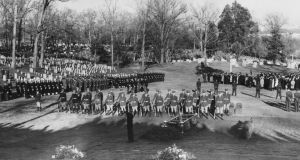 The weather in Washington was cold and crisp, and the 26 Irish Army cadets were not thinking about the watching world. They just wanted to ensure they could hear the orders to perform their drill.

Eleven of the cadets who performed at president John F Kennedy’s funeral at Arlington National Cemetery in Virginia return to his graveside today, 50 years later, to mark the moment they made history as the first foreign military to form an honour guard at the freshly dug grave of a US president.

“In hindsight, things become almost inexplicable – how close we were to the grave, how privileged we were to be there with the representative body of the American forces away to our right,” said Dick Heaslip, now a retired army colonel who was 20 when the cadets performed their silent drill.

Wreath
Today the former cadets along with a colour party of five cadets from the current 89th class, their commanding officer and a piper will lay a wreath at Kennedy’s grave next to the eternal flame.

They will also present one of the rifles they performed with in 1963 to the cemetery and a class pennant to the old guard, the US regiment that hosted them 50 years ago at nearby Fort Myer.

Speaking after watching New Zealand beat Ireland in the rugby in an Irish bar in Washington, four of the cadets recalled that famous funeral.

Mr Heaslip, father of Irish rugby player Jamie, still nursing the disappointment of the team’s defeat, said he has visited Kennedy’s grave twice since in 1963. “You can’t but stand there and think what you did 50 years ago,” he said. “I find myself moved by it.”

They are still amazed that they, as young Irish soldiers aged between 18 and 20, were asked to perform at the funeral ahead of the honour guards of the US army, air force, navy and marine corps.

‘Unprecedented’
“It was totally unprecedented to have foreign troops in a position of honour next to the grave of a US leader,” said one of the 37th class of cadets, Bill Nott, now a retired army colonel.

“You just can’t picture cadets from West Point being at the graveside of an Irish president.”

Kennedy had been so moved when he saw the 36th class of army cadets perform their silent drive at the grave of the 1916 Rising leaders at Arbour Hill during his visit to Ireland in June 1963 that a personal request came from Jacqueline Kennedy for members of the 37th class of cadets to perform it at the funeral.

The cadets had been on a night’s leave when the call came in late on Saturday, November 23rd, to return immediately to the Curragh in Kildare to prepare to fly to Washington.

An estimated 41.5 million homes in America out of 50 million with televisions watched Kennedy’s funeral on Monday, November 25th, 1963 – three days after his assassination in Dallas, Texas.

The cadets performed before the Kennedy family and dignitaries including president of France Charles de Gaulle, Ethiopian emperor Haile Selassie and the Duke of Edinburgh.