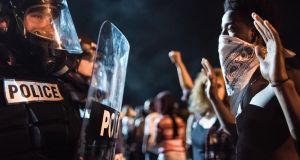 Police officers face off with protesters following the death of a man shot by a police officer in Charlotte. Photograph: Sean Rayford/Getty Images

The fatal police shootings of two more African-American men in separate incidents in Oklahoma and North Carolina within five days have sparked outrage and violent protests.

A Tulsa police officer fatally shot Terence Crutcher (40), an unarmed black man, in Oklahoma on Friday night after his car was found abandoned in the middle of a road.

Video footage recorded from the dashboard camera on a police car and from a circling police helicopter showed Mr Crutcher with his hands up and his back turned on police as he walked towards his car before he fell to the ground after being Tasered and shot.

On Tuesday, police shot dead Keith Lamont Scott (43) in Charlotte, North Carolina’s biggest city, after issuing multiple warnings that he drop the weapon he was holding.

His killing triggered a night of protests and violence that left 16 officers injured after demonstrators attacked police with rocks and blocked the state’s busy I-85 highway.

Kerr Putney, police chief of the Charlotte-Mecklenburg County Police Department, which is responsible for the Charlotte area, said that what police were investigating in the incident was a “little different than how it’s been portrayed so far on social media”.

“The officers gave loud, clear, verbal commands, which were also heard by many of the witnesses,” he said.

The police officer who fired the fatal shot, Brentley Vinson, an African-American, has been placed on administrative leave as is normal following such shootings.

In Oklahoma, officer Betty Shelby, a five-year veteran with Tulsa police, has also been placed on administrative leave while the shooting is investigated.

She claimed that Mr Crutcher was reaching into the window of his car when she shot him. Video footage showed that the window was closed.

One officer in the helicopter was recorded on audiotape saying of Mr Crutcher shortly before he was shot: “That looks like a bad dude, too. Could be on something.”

The shootings have renewed the public debate about the police use of force against black Americans.

Hillary Clinton, the Democratic candidate, tweeted yesterday, after North Carolina police said Mr Scott was armed with a handgun: “Keith Lamont Scott. Terence Crutcher. Too many others. This has got to end.”

The Counted, the Guardian newspaper’s database tracking fatal police shootings, said that Mr Scott was the 788th person to be killed by US law enforcement this year.