Famine exhibit in US sheds new light on women’s role 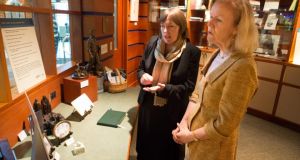 The potato blight had been in Ireland for several months when Hester Catherine Browne, wife of the second marquess of Sligo, wrote to the steward of her estate, George Hildebrand, in December 1845 wondering how she should help the people living around Westport House in Co Mayo during a stormy winter.

“Which do you think best – that I should send you £25 to buy blankets for some of the very poor people at Westport or in the neighbourhood of Westport, or that I should buy the blankets here and send them to you,” she asked Hildebrand, corresponding from Dublin in her beautiful handwriting.

The letter is one of 20 written by Lady Sligo, taken from a collection of more than 200, on display in the inaugural exhibition of Ireland’s Great Hunger Institute at Quinnipiac University. The college is on the outskirts of New Haven, Connecticut, almost halfway between New York and Boston.

In 2012 Quinnipiac University president John Lahey, an Irish American who grew up in the Bronx, opened Ireland’s Great Hunger Museum, home to the world’s largest collection of visual art, artefacts and printed materials relating to the Great Famine.

Headhunted
Last year he headhunted leading Famine historian Prof Christine Kinealy, author of the seminal 1994 history of Ireland between 1845 and 1852, This Great Calamity, to become professor of history and Irish studies and to run the university’s new Great Hunger Institute as its director.

Murray, a member of the university’s board of trustees who died in 2012, was taken by the story of the Famine when Mr Lahey made the Great Hunger the theme of New York’s St Patrick’s Day parade when he was Grand Marshall in 1997, the 150th anniversary of Black ’47, the worst year of the Famine.

‘Hidden treasure’
The impressive collection of Famine art, both contemporaneous and contemporary, at the museum has been complemented by Lady Sligo’s letters, which Prof Kinealy describes as “a hidden treasure.”

“They show the role and the agency of women at a time when women were often invisible,” she said.

The letters shed light on the life of a Protestant landlady and a member of the Anglo-Irish gentry who ran the day-to-day affairs of her estate, tended to her ailing husband and raised 13 children.

Lady Sligo’s letters complicate the “simple narrative of bad landlord, good tenant,” said Prof Kinealy. After her husband Howe Peter’s death in 1845, Hester Catherine Browne helped tenants on the state and her son George, the third marquess, kept the Westport workhouse open with his own personal subventions and arranged for a shipload of food to be brought into the town in 1847.

Speaking at the opening of the exhibition on Tuesday, Prof Kinealy said the letters “challenge simplistic stereotypes about the role of women, of life in the big house and the relationship between Protestant landlords and their Catholic tenants.”

Discovered by Conor Kenny of Kennys Bookshop in Galway, the letters were sold to the university by a private Irish collector who had acquired them in France. The Browne family, who still live in Westport House, had been unaware of their existence, according to Prof Kinealy.

It was apt that the first female Irish Ambassador to the United States Anne Anderson should open an exhibition that offers a new understanding of the role of women in the mid-19th century.

Women generally had walk-on parts, appearing in crowd scenes or cameo roles as sweethearts or muses, Ms Anderson said at the opening; it was rare to glimpse women acting in their own right.

“Lady Sligo’s voice interests us, not just as a woman’s voice. It is a very much a voice of her time imbued with the attitudes and I would even say some of the prejudices of her time,” she said. “It is an Anglo-Irish voice, a landlord’s voice but it is also a humane voice in an inhumane time.”