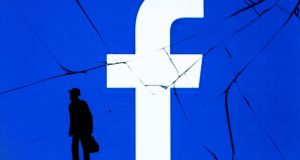 The attorney general for Washington, DC, said on Wednesday the US capital city had sued Facebook Inc for allegedly misleading users about how it safeguarded their personal data, in the latest move against the company in relation to the Cambridge Analytica scandal.

Attorney general Karl Racine said Facebook misled users because it had known about the incident for two years before disclosing it. The company had told users it vetted third-party apps, yet made few checks, Mr Racine said.

Facebook said in a statement: “We’re reviewing the complaint and look forward to continuing our discussions with attorneys general in DC and elsewhere.”

The lawsuit alleges the quiz software had data on 340,000 DC residents, though just 852 users had directly engaged with it.

Facebook could be levied with a penalty of potentially close to $1.7 billion, if penalised for each consumer affected.

Privacy settings on Facebook to control what friends on the network could see and what data could be accessed by apps were also deceiving, Mr Racine said.

“Facebook’s lax oversight and confusing privacy settings put the information of millions of consumers at risk,” he told reporters on Wednesday. “In our lawsuit, we’re seeking to hold Facebook accountable for jeopardising and exposing the information [of its customers].”

Mr Racine said Facebook had tried to settle the case before he filed the lawsuit, as is typical during investigations of large companies.

He described Facebook’s co-operation as “reasonable”, but said that a lawsuit was necessary “to expedite change” at the company.

At least six US states have ongoing investigations into Facebook’s privacy practices, according to state officials.

In March, a bipartisan coalition of 37 state attorneys wrote to the company, demanding to know more about the data used by Cambridge Analytica and its possible links to US president Donald Trump’s 2016 election campaign.

Also in March, the US Federal Trade Commission (FTC) took the unusual step of announcing that it had opened an investigation into whether the company had violated a 2011 consent decree, citing media reports that raised what it called “substantial concerns about the privacy practices of Facebook”.

If the FTC finds Facebook violated the decree terms, it has the power to fine it thousands of dollars a day per violation, which could add up to billions of dollars. – Reuters