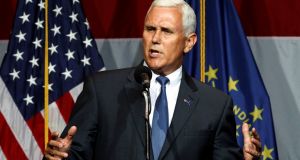 Trump met Indiana governor Mike Pence at his residence yesterday, a morning after introducing the presumptive Republican presidential nominee at a rally in a suburb of Indianapolis on Tuesday night. It was one of a series of audition-like appearances Trump has arranged to test the suitability of his vice-presidential contenders.

The frenzy of backroom meetings and 11th-hour lobbying comes before the four-day Republican national convention in Cleveland, Ohio, next week when the party formally introduces its presidential ticket to tens of millions watching on television.

The businessman’s campaign team has signalled that Trump will announce his running mate at what is expected to be a joint appearance tomorrow.

Trump’s meeting with the Indiana governor and former congressman, an arch-conservative, was attended by the businessman’s daughter Ivanka Trump, her husband Jared Kushner, and Donald Trump jnr – family members who have become Trump’s kitchen cabinet, feeding into key decisions during his presidential campaign.

Adding to the frenetic speculation around whom the billionaire might pick, Trump met former Republican speaker of the House of Representatives Newt Gingrich and Alabama senator Jeff Sessions in Indianapolis yesterday, and spoke by phone with New Jersey governor Chris Christie. Trump’s family met Mr Christie in New York on Tuesday.

The last-minute flurry of meetings had all the drama that accompanies the pick of Mr Trump’s newest recruit in his popular reality TV series, The Apprentice.

“Trump’s pick might be more consequential because it would be his first governance decision – his vice-presidential selection will be evaluated through the lens of governance,” said Republican pollster Whit Ayres.

The Manhattan-based property developer has said that he wants a political insider with knowledge of working congressional channels. Both Mr Pence and Mr Gingrich would fit that bill. The Indiana governor served six terms in the House of Representatives and chaired the House Republican Conference from 2009 to 2011, while Mr Gingrich, a Republican presidential candidate in 2012, masterminded the party’s takeover of the lower chamber of Congress in 1994 during his 20 years on Capitol Hill.

Mr Pence, raised in an Irish American Catholic family, might shore up concerns about Mr Trump, the thrice-married former Democrat, among social conservatives.

A former conservative radio talk show host before he entered politics, the cool-headed governor sparked national outrage last year when he signed a law that critics argued would have allowed businesses to deny services to gay people for religious reasons. “I’m a conservative,” he once said, “but I’m not angry about it.”