Donald Trump says he would like to punch protester in face

‘We’re not allowed to punch back any more’ says US billionaire, recalling ‘the old days’

At a campaign rally in Las Vegas, Nevada, Donald Trump tells supporters he would like to 'punch in the face' a protester who was being escorted out of the arena. Video: Reuters 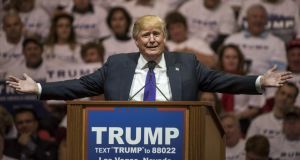 Republican presidential front-runner Donald Trump has said he would like to punch a protester in the face, bemoaning the “old days” when he said the man would have been taken out of the event on a stretcher.

The billionaire businessman made the comments as security staff escorted the protester from a Las Vegas arena filled with thousands of Trump supporters on the eve of the Nevada caucuses.

The guards were being “very gentle”, Mr Trump said, allowing the man to walk out of the arena smiling.

“You know what I hate? There’s a guy totally disruptive, throwing punches. We’re not allowed to punch back any more,” he said.

Reporters did not see why the man was ejected, and it was unclear whether he had actually thrown any punches.

But Mr Trump continued: “I love the old days. You know what they used to do to guys like that when they were in a place like this? They’d be carried out in a stretcher, folks.”

The crowd thundered in agreement.

“I’d like to punch him in the face,” Mr Trump added.

Mr Trump continued to lash out at rival Ted Cruz, telling the crowd: “This guy is sick. There’s something wrong with this guy.”

He took specific issue with an ad Mr Cruz’s campaign has been showing that accuses Mr Trump of being against turning over government land in Nevada to state control.

But Mr Trump said it was “not a subject I know anything about”.

“Something to do with I want to take away your land? And I want to keep it in the federal government? I don’t even know what the hell they’re talking about,” he said.

The Texas senator suggested that when one of his supporters at a rally in Elko, Nevada, shouted that he should “put Hillary in jail” if he is elected in November.

Mr Cruz paused, then responded: “With any luck, she’ll be there already.”

The capacity crowd cheered at the suggestion that the former US secretary of state who has been dogged by questions about her private email use at the state department should be locked up.

Mr Cruz later added “I am told the Democrats are opening up a new polling place at Leavenworth” — a reference to the federal prison in Kansas.