Donald Trump’s most outrageous tweets from over the years 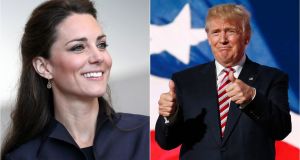 Donald Trump tweeted in 2012: ‘Kate Middleton is great--but she shouldn’t be sunbathing in the nude--only herself to blame’

US President Donald Trump is known for using social media as a place to rant and rave, often using the platform to discuss foreign policy decisions such as his controversial Muslim ban.

This , however, is a habit he formed long before his election and there are some real gems buried down his profile going all the way back to 2009.

These include criticising Kate Middleton for being caught on camera sunbathing topless, calling Barack Obama “inelegant and unpresidential” and saying Russian President Vladimir Putin is “scheming and beaming on how to take over the World”.

Some of his most stomach-turning comments are about women, such as:

* Saying Cher is “an average talent who is out of touch with reality” and advising her to “stop with the bad plastic surgery”.

* Saying editor of The Huffington Post Arianna Huffington is “ugly both inside and out” and “gross”.

The Irish Times offbeat team has dug up some of his most incendiary comments from over the years, a selection of which is above.