Are staff really live tweeting their despair from inside the White House? 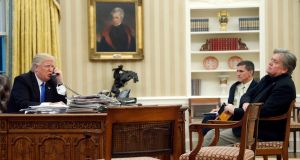 After less than a week, the account has approaching half a million followers.

Now that political satire is dead, we must make some decisions about what will occupy the space in our lives it used to fill. You might just shrug and say “events”. And while it’s true that most mornings the radio news bulletin serves up as scabrous an indictment of politics as anything a writer could invent, it’s not funny like Veep .

Some weird synthesis of the real and the made-up – you can use the term “evention” if you promise not to credit me – may be the answer. But while you’re waiting for it to come along, have a look the Twitter account @RoguePOTUSStaff . It purports to be leaking information from inside the White House, mostly more in sorrow than in anger : “POTUS was dismissive of PM May. ‘I hope she’ll like us, but she doesn’t have much to offer’.”

After less than a week, the account has approaching half a million followers. According to Twitter, this includes 57 people I follow – a thin but fairly representative cross section of the sneering liberal media elite. Taken together, the account’s 200-odd tweets paint a picture of a scheming and incompetent inner circle desperately trying to rein in a president who has little understanding of his role and few interests beyond gratifying his own vanity. And that rings true, because it’s exactly what dismayed liberals like me want to hear.

POTUS was dismissive of PM May. "I hope she'll like us, but she doesn't have much to offer."

POTUS fully overwhelmed after full week on the job. Things spilling over into out of office lives for everyone.

The account is one of dozens of “unofficial” – and in some cases fake – Twitter accounts set up after Trump cracked down on tweeting across government agencies. But it is crafted with some care, and so far has avoided any obvious pitfalls of fakery.

Of course part of its appeal is that it might yet be real. It tracks real-time events so closely that it seems to have the knack of prescience. Theories about its inauthenticity (including claims it is a distraction created by White House adviser Steve Bannon) are, if anything, more preposterous.

One debunker alleged it was Russian propaganda because one tweet used the word “ Bannon-esk ” instead of “Bannonesque”. I’m no linguist, but I’d guess the odd spelling was deployed to save space in a 140-character tweet.

Most of all @RoguePOTUSStaff offers hope in the guise of despair – the promise that an administrative setup this stupid cannot endure. There’s one thing it certainly isn’t, and that’s satire. There are no jokes, and nothing like exaggeration. If isn’t real, it might as well be. – (Guardian Service)

The Music Quiz: What was Shane MacGowan’s first band called?
6

YA fiction: Growing up black in the US
7

Michael Kiwanuka: ‘If you’re a creative, you don’t try and be that, you just are’
10