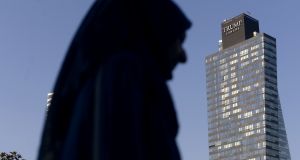 Trump Towers in Istanbul: Earlier comments by Donald Trump prompted Tayyip Erdogan to call for his name be taken from the skyscrapers.

At Trump Towers in Istanbul, the business mogul-turned-president elect’s first to be built in Europe, Christmas trees and lights give the sense all is well in Turkey’s largest city.

At 37 and 39 storeys high, the pair of skyscrapers, which house a cinema, offices, a mall and apartments, are a prominent landmark in the city’s financial district. The pleasure of having US president-elect Donald Trump’s name adorn the towers earns the New Yorker millions of dollars a year, though he admitted last December that holding such prominent ties in Turkey amounted to a “little conflict of interest”.

Turkey has been racked by instability and a clear slide away from democratic governance in recent years, and among the multitude of challenges America’s president-elect faces is how his team go about reconciling Mr Trump’s business interests and radical election campaign with the kind of diplomacy essential to engaging with this regional powerhouse.

Chief among the challenges is Mr Trump’s stance towards Muslims, one of a number of negative facets to the new president that irks Yusuf Ozgul, a jewellery store manager in the Trump shopping centre.

“Since he was elected president, the [Turkish] lira has almost collapsed against the dollar and euro,” he said. “We buy diamonds from Belgium – how are we suppose to tell customers who come in here that the prices they see tomorrow will be much more than today? All of our jewellery is bought overseas so what happens in the West affects us a lot.”

The scale of the unrest and complexity that shapes the war in Syria, as well as the various campaigns against Islamic State in both Syria and Iraq mean that the president-elect’s route to a workable Middle East policy must run through Ankara, a government itself in the midst of committing a crippling crackdown against political opposition figures and the independent press.

Tellingly, the new US administration has so far come out firmly on the side of the Turkish government, with Mr Trump speaking by phone with President Tayyip Erdogan just days after his election win. Shortly before taking up the position, Mr Trump’s national security adviser wrote how Turkey, despite its undemocratic turn, remains a US ally and “needs our help”.

Lieut Gen Michael Flynn said that cleric Fethullah Gülen, whom the Turkish state is seeking to extradite from the US on charges of orchestrating a failed coup last July, is a radical Islamist. “From Turkey’s point of view, Washington is harbouring Turkey’s Osama bin Laden,” he wrote in an article for Washington newspaper the Hill on November 8th. Washington says not enough evidence has been presented to warrant an extradition.

Mr Trump has repeatedly spoken of his intention, in vague terms, to defeat Islamic State, also a major aim of Turkey through its ongoing military operation in northern Syria. The mutual desire to defeat Isis should see the pair become obvious allies.

Yet as with much of Mr Trump’s politics, reality regularly doesn’t quite fit with his and his backers’ pronouncements.

This week Lieut Gen Flynn was exposed as, in fact, briefly supporting the failed coup attempt the night it unfolded.

And just days after his election, Mr Trump said he planned to end support for the “moderate” Syrian rebels so central to Ankara’s designs for a buffer zone along the Turkish-Syrian border, and who have been deployed to keep separatist Kurds and Islamic State jihadists from Turkish territory. How that squares with America’s obvious reliance on crucial logistical support from Ankara and its close ties to Syrian Kurdish militias in order to attack Isis remains to be seen.

When still a candidate, Mr Trump said that as president he would prevent Muslims and people from countries affected by terrorism from entering the US. The Turkish president was outraged, and called for his name be taken from the Istanbul skyscrapers.

Now, Mr Erdogan has, too, appeared to have changed his tune. Last Wednesday, he seemed to redouble his support for the president-elect. “This is the result that came out of the ballot box. Trump came out. Respect it,” he said in criticism of the waves of anti-Trump protests that have broken out following the November 8th election vote.

Mr Erdogan even went as far as saying Mr Trump’s anti-Muslim stance doesn’t reflect his true position, effectively suggesting the president-elect does not mean what he says.

“We are used to such things in politics. Today one speaks this way, then this mistake is corrected,” he said.

Back at Trump Towers in Istanbul, an emerging economic “crisis”, in the words of one store employee, is of more concern to him than what a Trump presidency may mean for Turkey.

“For two years our economy has been terrible; foreign tourists have been killed by suicide bombers in two important [tourist] areas,” said a 33 year old who works at a men’s clothing store.

“Hillary [Clinton] would have been better for the Turkish people, she’s more aware of the world,” he said. “Yes, Trump is a businessman, but he’s friends with our president [Erdogan], and I hate him.”