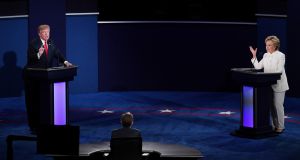 Republican candidate Donald Trump declined to say whether he would accept the result of the US presidential election if he lost, raising doubts about the legitimacy of the American democratic process.

In an extraordinary admission during a fiery third and final presidential debate with his Democratic opponent Hillary Clinton, the New York businessman escalated his unfounded grievances about a “rigged” system in an astonishing declaration by refusing to commit to accepting the outcome of the November 8th vote.

He twice declined to say, when pressed, whether he would concede if he is defeated in the election, contradicting statements made by his running mate and campaign staff in recent days that he would accept the result.

“I will look at it at the time,” the property developer said, repeating his claims of the past week, without offering evidence, that widespread voter fraud and a conspiracy by the media might affect the outcome of the election, saying that they had “poisoned the minds of the voters”.

Asked again whether he would accept a peaceful transition of power to the winning candidate, Mr Trump said: “I will tell you at the time,” referring to the election day. “I will keep you in suspense.”

“That’s horrifying,” Mrs Clinton responded. “I am appalled that someone who is the nominee of one of our two major parties would take that position.”

She pointed to Mr Trump’s long tradition of making allegations of bias against him, even pointing to his complaint about not winning an Emmy award for his television show, The Apprentice.

“Should have gotten it,” said the celebrity businessman, reinforcing Mrs Clinton’s argument.

Trailing badly in the polls with just 19 days to go to election day, Mr Trump has spent much of the past week complaining about a biased electoral system and warning about widespread voter fraud.

The businessman began the 90-minute televised encounter in Las Vegas with uncharacteristic discipline, debating substantively with Mrs Clinton on the issues of Supreme Court appointments and Second Amendment gun ownership rights and with an unusually even temperament. That was until his Democratic rival goaded him on being a “puppet” of Russian leader Vladimir Putin.

Refusing to condemn Mr Putin after Mrs Clinton accused the Russians of trying to influence the outcome of the election by hacking American computers, Mr Trump said he did not know Mr Putin, but he added: “He said nice things about me – if we got along well, that would be good.”

“Look, Putin – from everything I see – has no respect for this person,” he said, referring to Mrs Clinton.

“Well, that’s because he’d rather have a puppet as president,” she responded, angering him.

“No puppet, no puppet. You’re the puppet,” snapped a furious Mr Trump, repeating himself.

The debate felt at times like a last-gasp effort by Mr Trump to salvage a struggling campaign. By the second half, it had turned sharply from policy to personal insults as the barbs flew and the debate descended into the kind of vitriolic exchanges that dominated the first two debates.

“Such a nasty woman,” Mr Trump said at one point in the debate when Mrs Clinton suggested that he might try to figure out a way to avoid paying social security, like he has avoided income taxes.

The debate became even uglier when it turned to the subject of Mr Trump’s alleged sexual improprieties, claims that have rocked the US presidential race and sent him plunging in the polls.

Asked about the accusations that he had sexually assaulted nine women, Mr Trump said that the claims had been “largely debunked” and that he had “didn’t know” the women who made the accusations, alleging that Mrs Clinton’s campaign team was behind the women coming forward.

“The stories are all totally false. I have to say that. And I didn’t even apologise to my wife who is sitting right here because I didn’t do anything,” he said.

When Mrs Clinton had her turn on the issue, she referred to his past remarks discrediting his accusers by saying that he did not abuse them because of their appearance or they were not his “first choice”. To each reference by the Democratic nominee to Mr Trump’s own comments, the Republican nominee lied, denying three times that he had said such things. “I did not say that,” he said.

“Donald thinks belittling women makes him bigger,” she said. “He goes after their dignity, their self-worth and I don’t think there is a woman anywhere who doesn’t know what that feels like.”

When Mrs Clinton completed her blistering denunciation of the Republican, Mr Trump declared: “Nobody has more respect for women than I do, nobody.”

The audience laughed, forcing the debate moderator Chris Wallace of Fox News to ask for calm.

On the topic of immigration, Mr Trump accused Mrs Clinton of offering “amnesty” to undocumented immigrations – “which is a disaster” – and of proposing “open borders”.

The Republican forcefully touted his plans to build a wall along the southern border with Mexico and to deport “drug lords” in what he said would be one of his first acts as president if elected.

“We’ll get them out, secure the border and once the border is secured at a later date, we’ll make a determination as to the rest. But we have some bad ‘hombres’ here and we’re going to get them out,” he said, using the racially tinged Spanish term to define the illegal criminals in the country.

According to a snap CNN/ORC poll of a sample of people who watched the final debate, 52 per cent said Mrs Clinton won, while 39 per cent declared Mr Trump the victor.

The same poll gave the victory to the Democrat in the first two debates.