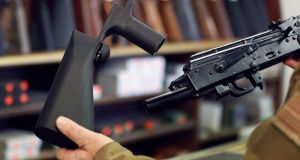 Manufacturers of bump stocks, which increase the firing speed of rifles, said they were overrun with orders. Photograph: George Frey/Getty Images

Sales of the firearm accessory that the Las Vegas gunman used to modify his rifles jumped this week, causing some companies to sell out of the so-called bump stocks even as Walmart and Cabela’s stripped them from their websites.

The products – conversion kits that allow semi-automatic weapons to fire hundreds of rounds per minute, similar to an automatic weapon – were once relatively obscure specialty items aimed at gun enthusiasts who own semi-automatic rifles. But since the massacre on Sunday, when the gunman fired on a music festival crowd from the 32nd floor of the nearby Mandalay Bay Resort and Casino, killing dozens and injuring more than 500, interest in the accessory has surged. Officials said that 12 of the rifles found in the gunman’s suite were outfitted with bump stocks.

Calls for tighter gun control legislation, were suddenly strengthened this week after Congressional Republicans indicated they would be open to banning bump stocks.

Walmart took down listings for bump stocks on its website this week. The company said in a statement that the products never should have been sold on its site, that they were sold by third-party sellers, and they were “immediately removed” because they violated the company’s prohibited items policy.

Cabela’s, the outdoor retailer, also took bump stocks off their website this week. The company, recently purchased by rival Bass Pro Shops, did not immediately respond to requests for comment. Amazon does not sell bump stocks. The company explicitly forbids listings of “slide fire stock and weapons kits, such as: bump firing devices, stocks, and kits,” according to its website. The policy has been in place “for a while, it’s not a recent change”, said a spokeswoman, Cecilia Fan.

But manufacturers of the devices said they were overrun with orders. The website for one manufacturer, Bump Fire Systems, was down Thursday. The company wrote on its Facebook page that its servers had been overwhelmed by “high traffic volume”. Another maker, Slide Fire, said on its website that it had suspended taking new orders to focus on existing orders after earlier saying that it was out of stock “due to extreme high demands”. Neither manufacturer responded to requests for comment.

“Will I be able to order sometime soon? I want to get one before there is a push to make them illegal,” one commenter posted on the Facebook page of Bump Fire Systems.

Zack Cernok, a Pennsylvania gun owner from a family of hunters, was one of many consumers trying to buy a Bump Fire bump stock this week. “I don’t even have the gun for it, but I want the stock just to have it down the line,” he told the New York Times on Wednesday. “I just like the idea of them and want to see how it feels.”

Bump Fire sells stocks for an AK-47 and an AR-15 for $99.99 (€85) each. Slide Fire’s stocks are priced between $140 and $300. On Slide Fire and Bump Fire’s Facebook pages, several customers suggested that the increased demand for bump stocks was because of fear that the products could soon be outlawed.

Senator Dianne Feinstein, along with more than two dozen other Democrats, proposed a Bill on Wednesday to ban the accessory. The products allow semi-automatic weapons to be modified to perform at the level of automatic weapons, which are highly regulated, effectively creating a legal loophole, she said.

Top congressional Republicans also signalled that they would be open to banning bump stocks.

The National Rifle Association has said the devices should be “subject to additional regulations”.

“The only reason to fire so many rounds so fast is to kill large numbers of people,” Ms Feinstein said in a statement. “No one should be able to easily and cheaply modify legal weapons into what are essentially machine guns.”