Mother and child die after being sucked out of vehicle 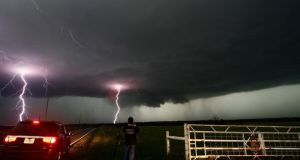 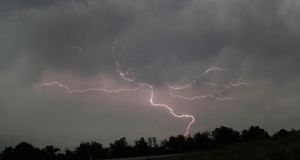 Lghtning from a tornadic thunderstorm strikes photographed in Cushing yesterday. Violent thunderstorms produced tornadoes in central Oklahoma that killed five people including a mother and her baby. Photograph: Gene Blevins/Reuters 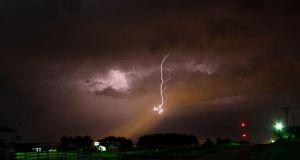 Cloud-to-ground lightning from a tornadic thunderstorm strikes in Perry May 31, 2013. Photograph: Gene Blevins/Reuters 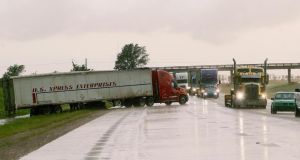 Oklahoma City Mayor Mick Cornett warned of the dangers posed by taking to the roads during a tornado thunderstorm. Photograph: Bill Waugh/Reuters

Nine people were killed in tornadoes that swept through central Oklahoma, part of a storm system that caused widespread flooding in Oklahoma City and its suburbs, the state’s chief medical examiner said today.

The dead included two children and seven adults, said Amy Elliott, a spokeswoman for the medical examiner’s office. The death toll earlier had been reported as five.

The tornadoes struck just 11 days after a twister ranked as EF5, the most powerful ranking, tore through the Oklahoma City suburb of Moore and killed 24 people. The latest storms dumped up to 20cm of rain on the Oklahoma City area, causing flash flooding that submerged parts of the sprawling metropolitan area that is home to more than 1.3 million people.

The devastation was caused by large, long-lasting thunderstorms known as supercells, which produce the strongest tornadoes, along with large hail.

“Some of these tornadoes were wrapped in rain and they were difficult to see,” he said.

The tornadoes hit during yesterday’s evening rush hour and many of those hurt or killed were on the roadways.

Among the dead were a woman and her baby who were traveling on Interstate 40, just west of Oklahoma City, when their vehicle was picked up by the storm and they were sucked out of it, said Betsy Randolph, spokeswoman for the Oklahoma Highway Patrol.

“For reasons that are not clear to me, more people took to the roads, more than we expected. Everyone acted differently in this storm, and as a result, it created an extremely dangerous situation,” said Oklahoma City Mayor Mick Cornett. “I think we are still a little shaken by what happened in Moore. We are still burying children and victims, so our emotions are still strong,” he added.Reuters