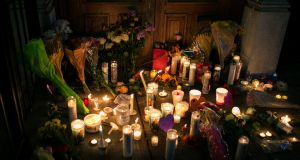 With its trendy bars, bright boutiques and cobblestone streets, Dayton’s Oregon District has been a leading light in the Ohio city’s efforts to bring life back to its once-dreary downtown core.

But in just 32 seconds early last Sunday, nine people were shot to death on its main thoroughfare, East Fifth Street, as it teemed with revellers.

Now, days after becoming the scene of the worst mass shooting in Ohio’s history, that vibrancy lies shattered, and locals are left wondering what can and may be done to keep high-powered weapons out of the hands of would-be shooters.

Many business owners and staff working the bars and bistros along the tree-lined East Fifth Street said they weren’t ready to speak publicly about the tragedy.

On Thursday outside Ned Peppers, the bar that the attacker, Connor Betts, attempted to enter before being shot dead by police officers, a man brought a box of doves and invited people visiting a small memorial scene of flowers, candles and crosses to release the birds into the air one at a time.

One of the victims was 57-year-old Derrick Fudge from Springfield, a town 30 minutes from Dayton, who died in his son’s arms at the scene.

“I know the Fudge family and it’s a tragedy that a local person was taken out so young,” said Darrell Johnson, a US army veteran also from Springfield who came to pay his respects on Thursday. “It’s tragic. We have to do better when it comes to gun control. I believe in everybody being able to bear arms, but there has to be stronger gun regulation – background checks. And there’s no reason for a 17- 18- or 19-year-old to have an assault rifle. You don’t use an AR-15 or an AK-47 to hunt deer.”

Betts, who lived a 20-minute drive from the scene of the attack, had passed a background check before legally buying online from a dealer in Texas the AR-15-style gun he used to such devastating effect. In the space of a few seconds, he fired off 41 rounds, injuring 27 people in addition to the nine fatalities, among them his sister.

The high-capacity, drum-style magazine that the 24-year-old had attached to the rifle could hold up to 100 rounds of ammunition and can be openly bought in gun stores. Betts is not thought to have been motivated by any racist or anti-immigrant ideology, and previously made comments on social media in favour of Democratic presidential candidates Elizabeth Warren and Bernie Sanders, and was a registered member of the Democratic Party in neighbouring Greene county.

He is also reported to have attended a protest against a small KKK rally that was held in Dayton on May 25th, according to the Dayton Daily News.

In the aftermath of the killings, former friends of Betts have spoken about his apparent history of mental difficulties and obsession with mass shootings. At the anti-KKK protest in May, Betts was seen by a friend walking the streets carrying a high-powered assault rifle.

“I’m just so moved at how other people’s emotional disturbance can really do so much harm, so I wanted to spend a few minutes in prayer,” said Diana McKinnon from Dayton, as she stood close to the scene of the attack. She said her son worked as a tattoo artist across the street from Ned Peppers bar.

“My son’s girlfriend works at the bar. This is family. The people that I know on the street, these are good people. It hit very close to home. If any good can come from it, it’s that [gun control can become] a national conversation.”

In the aftermath of the attack, Ohio’s Republican governor Mike DeWine has spoken of plans to introduce “red flag” gun laws in the state, which would see individuals considered a danger to themselves or others bound by a judge to give up any weapons in their possession.

Asked whether she thought politicians might now act more vigorously to introduce gun control laws, Diana McKinnon said: “[Congressman] Mike Turner’s daughter was across the street at a restaurant during the killings and she called her father at that time. But I don’t know if this will change anything.”

Following the shootings Turner, a Republican from Dayton, has called for a ban on assault-type weapons and has vowed to support the red flag laws. Previously, Turner had opposed legislation put forward to restrict gun ownership and had close ties to the National Rifle Association.

“[The changes are] already happening,” said Ron Hounshell of efforts to introduce gun control laws and who lives five blocks from where the shootings took place. “People are looking at Dayton and El Paso [the Texas city where 22 people were shot dead last Saturday] as a turning point nationally.”

But not everyone agrees.

“I don’t think anything is going to change,” said Darrell Johnson, “because it’s easier to get a gun on the street than to go to a store and get one legally.”