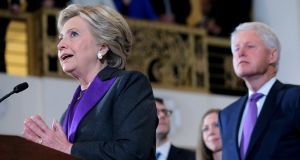 “As I was standing in the street, as quiet as can be,

A great big ugly American came up and tied his horse to me.”

These lines might be running through Hillary Clinton’s head today, now that a big ugly American has beaten her in the US presidential election.

She actually recited this old nursery rhyme one day in 1992, when asked how she felt to be at the centre of a media frenzy, according to the notes of my coverage of that year’s presidential election for The Irish Times.

The frenzy was over her reaction to a flurry of press allegations of sexual impropriety made against her husband, Bill Clinton, then Governor of Arkansas, who was running for president on the Democratic Party ticket.

Like Trump, Bill Clinton started off as a no-hoper against his opponent, George HW Bush who was seeking a second term. And similarly, Clinton’s chances were written off when he was accused of sexual improprieties, memorably termed by his chief-of-staff Betsey Wright “bimbo eruptions” and including alleged trysts with a rock groupie, former Miss Arkansas and rock and blues singer Gennifer Flowers.

Just like in the Trump campaign, a tape recording emerged in which Clinton was heard telling Flowers that if they both denied an affair, there would be “no problem” and complaining that because his rival Bob Kerrey was single, “nobody cares who he is screwing”.

Hillary’s response to this was to shape perceptions of her character throughout her career as candidate’s wife, first lady, senator and presidential candidate.

On television, sitting beside Bill, she said, “I’m not here because I’m some little woman standing beside my man, like Tammy Wynette… And you know, if that’s not enough for people, then heck, don’t vote for him.”

The country singer responded: “I believe you have offended every country and music fan and every person who has made it on their own, with no one to take them to the White House. ”

The episode focused the attention of Americans on Hillary for the first time. Twice voted one of the nation’s top 100 lawyers and a former chairman of the national Children’s Defence Fund, she seemed to be a formidable asset to her husband’s campaign. A Clinton friend remarked that in intellectual terms, he married above himself.

When admirers told Hillary they wished she was the candidate, Bill Clinton would jokingly reply, “Buy one, get one free.”

Negative perceptions of Hillary were enhanced when the Washington Post raised questions about Arkansas state contracts given to her law firm in Chicago. Bill Clinton’s rival for the Democratic nomination, Jerry Brown, accused him of “funnelling money to his wife’s law firm for state business”.

After a televised exchange during which Bill Clinton told Brown he was not fit to share a platform with his wife, a reporter asked Hillary about criticism of her professional life. She responded in a fit of pique, “I suppose I could have stayed at home, baked cookies and had teas.”

The remark provoked protests from women who had no alternative but to work at home, a demographic that Trump exploited in his campaign.

Later, as first lady, Hillary was given her head by the president to try to reform health care. Hurt by the media perception of her during the campaign she became secretive, elusive and vulnerable. The effort failed.

It fuelled a growing backlash against her from the right, which by then regarded Hillary as a dangerously politically-correct liberal.

She and Bill were also accused by conspiracy theorists of covering up the death of White House counsel Vincent Foster who committed suicide, despite investigations by the FBI and other law enforcement bodies confirming he had killed himself.

Traditionally the Republican Party uses cultural issues such as abortion and gay marriage to capture red-state America’s votes, convincing even the poorest state in America to vote for the party of big business, a phenomenon analysed by historian Thomas Frank in his 2004 book What’s the Matter with Kansas?

The conservative media, in particular Fox News, used the cultural issue of gun ownership and healthcare, and a history of missteps with working class white voters, to defeat Hillary and elect Donald Trump.

This, and the fact that American voters’ don’t seem to care about a candidate’s sexual misdeeds, may partly answer the question abroad today: “What’s the matter with America?”