Commentary: South by Southwest festival has lost its claws despite twee cat focus

In festival of interactivity, connectivity, sharing and Tindering, the two big stars were Grumpy Cat and Meerkat, a live-streaming video app 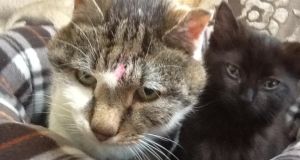 Pity the poor cat. Somehow that creature of infinite detachment emerged as the symbol of incessant attachment here at South by Southwest (SxSW) in Austin, Texas. In this festival of interactivity, connectivity, sharing and Tindering, the two big stars were Grumpy Cat, who groggily greeted an endless stream of fans, and Meerkat, the live-streaming video app pounced on by presidential candidates eager to seem hip. (The meerkat is actually from the mongoose family.)

Animal shelters hosted “yappy hours” with free beer, and Friskies cat food set up the Haus of Bacon, where internet cat stars took photos with groupies. There was even an attempt to rebrand cats to be less snobby and more in tune with the huggy internet age.

Jackson Galaxy, the tattooed, pierced, catwhispering host of My Cat from Hell on Animal Planet, held a standing-room-only session called “CATastrophe: Good, Bad and Ugly of Internet Cats.” He advised the crowd – some wearing orange cat ears – that, rather than calling cats “aloof”, it might be better to describe them as “freethinkers”, “Zen masters” and “Buddhists”.

Galaxy’s attempt to warm up the image of cats was undercut by research suggesting that the only species that seems to show no regret or forgiveness after spats are cats.

“I would hesitate to call cats domestic animals,” he told me, adding that he liked the fact that they are not “slavish” but rather “no compromise” creatures who “kill stuff really well”.

I needed someone like Toby to help me cut through the verbal clutter and Panglossian spin in a world where celebrities are “influencers”, people are “users”, news is “content”, “platforms” are not shoes, the “Deep Web” is no place for Charlotte, and virtual reality trumps plain old reality. Toby would glide coolly past the drones in the Robot Petting Zoo. But he would make quick work of Yik Yak co-founders Tyler Droll and Brooks Buffington, former frat brothers wearing matching turquoise Yik Yak socks for their interview on stage.

They tried to push back against criticism that their anonymous, location-based social app used by students is a magnet for crude sexual hazing, bomb threats and bullying: the intimidating “Wild West of anonymous social apps”, as a law professor put it in a Times article.

Droll and Buffington said they wanted to create a site that would offer “a level playing field for content” no matter your race, gender, ethnicity or popularity. They talked about how it could provide lifesaving help on donation drives and showed a sample of innocent “yaks”. In one, a lost girl was escorted back to her building; in another, redheads were praised as awesome.

“Do you think we’re so feebleminded that we believe this flimflam about Yik Yak?” Toby would say serenely. “Look at any anonymous comments section online. Even I shudder, and I have claws and highly developed feral instincts.”

At a Marie Claire dinner for Veep cast at The Spotify House, I asked Tyler Winklevoss, who is developing a stock market for Bitcoin with his twin brother, to explain the invisible currency. “Bitcoin is internet money,” he said. “It’s a value transfer protocol.”

If Toby deigned to accept the Marie Claire invitation, he no doubt would interpolate: “Bitcoin more transparent? Balderdash! We don’t even know who invented it. It’s Disney dollars for tech nerds.”

Then there was my interview with Alex Winter, who graduated from playing Bill in Bill & Ted’s Excellent Adventure to creating an Epix documentary about the Darknet, where the Silk Road marketplace operated with Bitcoin, called “The Deep Web”.

“It’s like looking under the hood of the internet,” Winter said, arguing that the Deep Web is “largely used for good” by government agencies, dissidents and journalists. But Toby would certainly beg to differ, scoffing, “It’s a first-rate bazaar for drug dealers, child pornography peddlers, illegal arms salesmen and Bitcoin burglars.”

If I dragged Toby to the panel with Dan Rather and the former Obama adviser Dan Pfeiffer, he would twitch at the exuberance of Pfeiffer predicting a Meerkatting “revolution” in coverage.

Toby would sniff that South by Southwest was more social than media and prowl off to catch up with Judd Apatow. Not one to pussyfoot, Toby would offer his biting commentary as he left: “People at South By are not aiming higher anymore. They are aiming niche. They aren’t looking to do anything larger than themselves. They are aiming to monetise eyeballs in a petty way. They are making even less meaningful social apps and not creating things that are either blazingly new or deeply important to our lives or transformative to society. It’s not inspiring to aggregate 100,000 tweets.”