Clinton wants to ‘intensify and broaden’ fight against Isis 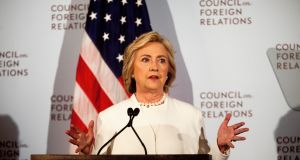 Democratic presidential frontrunner Hillary Clinton has called for more intensified and broader fight against Islamic State militants to include a no-fly zone in Syria and the use of European and Arab special forces alongside US troops.

Setting out a wide-ranging strategy designed to beat the jihadists in the wake of the Paris attacks, the former secretary of state outlined proposals stepping up and accelerating President Barack Obama’s efforts against the group

Presenting her plan forcefully in a speech in New York, Mrs Clinton said: “I do believe we can crush Isis’s enclave for terror. The time for delay is over.”

“It is time to begin a new phase and intensify and broaden our efforts to smash the would-be caliphate and deny Isis control of territory in Iraq and Syria,” said Mrs Clinton at the Council on Foreign Relations, a think-tank often used to make major policy statements.

Though the campaign is necessary, she said, local and regional ground forces would be needed to regain territory from Islamic State.

The Paris attacks have pushed terrorism and national security to the top of the debate agenda in the presidential campaign as the candidates set out their positions with 73 days until the first nominating contest.

Mrs Clinton’s Republican opponents have criticised Mr Obama, whom she served for four years as secretary of state, over a policy against Islamic State, also known as Isis, which they believe is feckless.

Supporting Mr Obama’s opposition to sending large numbers of US ground troops into the Middle East, Mrs Clinton said however there should be “greater freedom of movement and flexibility” for American ground forces training Iraqis to embed in local units and help target air strikes.

A no-fly zone would stop the forces of Syrian president Bashar al-Assad “slaughtering civilians,” while opposition forces supported by the US-led coalition could “help create safe areas where Syrians could remain in the country rather than fleeing toward Europe”.

Mrs Clinton said Russian president Vladimir Putin is “actually making things somewhat worse” by intervening in Syria but said there was a role for Moscow.

Calling for greater challenges against online Islamic State propaganda, she said: “Online or offline, the bottom line is that we are in a contest of ideas against an ideology of hate and we have to win.”

She rejected mostly Republican objections to Syrian refugees being allowed to enter the US.

“We cannot allow terrorists to intimidate us into abandoning our values and our humanitarian obligations,” she said.

“Turning away orphans, applying a religious test, discriminating against Muslims, slamming the door on every Syrian refugee – that is just not who we are.”

Republican frontrunner, businessman Donald Trump, has said he would “bomb the shit” out of Islamic State and destroy their oil fields.

Senator Lindsey Graham, the most hawkish of the Republican candidates though at the bottom of the polls, wants to send 10,000 US ground troops to fight Islamic State in Iraq and Syria.

1 Parents jailed over female genital mutilation of daughter
2 The notorious Donald John Trump goes on trial
3 Gardaí may have to wait days to interview mother of McGinley children
4 Border on Brexit: ‘Europe will look after Northern Ireland’s interests’
5 McDonald and SF candidates sign pledge to be guided by ard chomhairle
Real news has value SUBSCRIBE