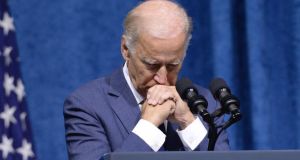 US vice-president Joe Biden: still weighing up whether his family can cope with the rigours of a national campaign

Hillary Rodham Clinton’s clumsy handling of the controversy over her use of a private email address as secretary of state has left some Democrats unsure about her 2016 candidacy and wondering who might step in if she slips up.

The name Joe Biden is in wide circulation.

The Real Clear Politics average of polls put Barack Obama’s vice-president at 14 per cent, trailing Clinton by more than 30 points in the race to become the Democratic nominee.

Although Clinton is still the clear frontrunner, her lead has narrowed and missteps over her emails have raised doubts about her capacity to win over voters in a general election as her poor polling on the “honest and trustworthy” scale extends to swing states.

The vice-president is seriously considering a presidential bid, though he is still weighing up whether his family can cope with the rigours of a national campaign as they grieve the loss of Biden’s eldest son. Beau Biden died of brain cancer in May, leaving behind a young family.

During a conference call last week with Democratic National Committee members, Biden was asked about his intentions. Were he to run, he said, he would “have to be able to commit to all of you that I would be able to give it my whole heart and my whole soul, and right now, both are pretty well banged up.”

Both would be key figures of support and help direct Biden on where he should pitch his campaign to win the appeal of the party’s left and to differentiate himself from Clinton.

It would be Biden’s third run at the presidency. A 1988 bid came undone by allegations that he plagiarised a speech by Neil Kinnock and embellished his academic record.

During an anaemic campaign in 2008, he was overshadowed by both Obama and Clinton.

For some Democrats, Biden, like Clinton, is seen as too much of a political insider to tap the anti-establishment anger among a disaffected electorate and too soft to far-left progressives who feel that the Obama administration has not gone far enough.

Biden’s close ties to the credit-card corporations based in Delaware, his home state, would not sit easy with the Democratic base. From a logistical point of view, he would also have a huge amount of ground to cover to catch up with Clinton, who has had a long head-start.

“It is pretty late,” said Matt Bennett, a Democratic strategist who has worked on several presidential campaigns. “It is extraordinarily difficult at this stage because you are forced to do everything at once: build the ship as you sail it, and that is very hard to do.

“You have to figure out: is your candidate better used raising money or campaigning because you start from so far behind?”

While Bernie Sanders, the self-described socialist senator from Vermont, is polling strongly, he is not seen as electable in a national election.

Also weighing on Biden’s mind is an emotional burden: it was reported that Beau Biden’s dying wish was to see his father run for the presidency one last time.

A movement called Draft Biden is trying to drum up support for the vice-president’s campaign. Much has been made of the fact that many of Obama’s fundraising bundlers in the 2012 campaign have not yet pledged their support to Clinton.

For Biden, there is much to consider.