Clinton charity struggles to rise above claims of corruption

Supporters at final charity gathering fire back at Trump charges 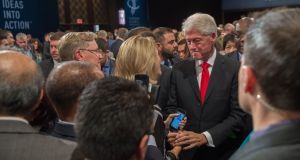 The 12th and final meeting of the Clinton Global Initiative (CGI), the Clinton Foundation’s signature event, hosted lofty discussions about clean energy in Haiti, disabled rights in Moldova and educational reform in the US that seemed worlds away from the dispiriting presidential election campaign.

Yet the valedictory was soured by Republican allegations that the charitable foundation was part of a “pay-for-play” scandal during Hillary Clinton’s state department tenure. In return for contributing to the foundation, critics say, corporations and foreign governments alike sought project approvals and access to top US officials.

Perhaps only the Clintons, whose quarter-century on the American stage has seemed an endless drama, could produce a charity that performs life-saving work for some of the world’s poorest people while exemplifying the cosy ties among some of its wealthiest.

The foundation’s sullied image frustrates those it has inspired. “I wasn’t at the state department with Hillary Clinton every day, but I know the good that got done here,” says Stephan Ouaknine, a clean-energy investor, citing programmes on climate change, the rebuilding of Haiti and distribution of vital medicines.

The foundation spent more than $249 million (€222m) in 2014, according to its most recent audited financial report. Of that more than 87 per cent was spent on its programmes, including health, climate and development.

Republican allegations, so far unproven, that Mrs Clinton rewarded donors with special favours while serving as secretary of state are “a caricature” of the Clintons, Ouaknine says.

Voters are less forgiving. In an ABC News/Washington Post poll this month, 59 per cent of respondents said Mrs Clinton’s state department gave special benefits to foundation donors and 90 per cent said these were inappropriate.

In cases involving Swedish companies granted relief from US sanctions on Iran; the sale of US uranium assets to a subsidiary of a company owned by the Russian government; and arms deals in the Middle East, press reports suggest a link between donations and later US government actions.

Following recommendations from FBI agents, the department of justice’s public integrity unit considered opening an investigation into the foundation but prosecutors saw no grounds to proceed.

Richard Painter, former president George W Bush’s chief ethics lawyer, says he saw no evidence Mrs Clinton violated any laws while dealing with the foundation as the nation’s top diplomat. If donors got better treatment from the state department than the average taxpayer, that is little different from how government officials in both parties treat campaign contributors.

“I don’t see any serious ethical issue when she was at the state department,” says Painter.

The foundation also earns top marks from watchdog groups such as Charity Navigator. Still, holding the CGI roughly seven weeks before the election raised eyebrows, even among Clinton supporters, since it highlighted her close ties to prominent US companies.

Its eclectic cast of attendees included designer Donna Karan, the mayor of Srebrenica, actor Ben Affleck and chief executives of companies such as Western Union and Freeport-McMoRan.

Denis O’Brien ridicules the idea that corporations are buying privileges. Companies spend millions on lobbyists to twist arms in Congress and the executive, he says. “Does Goldman Sachs need to give money to CGI to see the treasury secretary?”

Clinton supporters bristle at the comparative lack of scrutiny received by the Trump Foundation, through which the Republican candidate spent charitable funds on personal legal bills and two portraits of himself, according to the Washington Post.

If Mrs Clinton is elected, her husband will leave the board. But daughter Chelsea will remain a member, which Mr Painter says is a mistake.

If any Clinton remains a decision maker, he says, the foundation will be open to the same appearance issues that dog it today. – Copyright The Financial Times Limited 2016