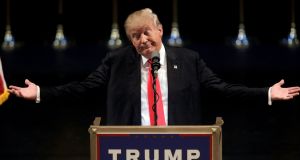 Billionaire Donald Trump unleashed an excoriating verbal attack on presumptive Democratic nominee Hillary Clinton yesterday calling her a “world-class liar” who “may be the most corrupt person ever to seek the presidency of the United States”.

Framing Mrs Clinton’s message as “old and tired” and her candidacy as a product of a rigged system and Washington’s machine, Mr Trump used one of the first scripted speeches of the general election campaign to present himself as the outsider alternative to his rival.

Speaking from one of his properties in New York, the apparent Republican presidential nominee described Mrs Clinton’s statements on her use of a personal email address and private server while serving as US president Barack Obama’s first secretary of state as “pathetic”.

Mr Trump then took aim at the Clinton Foundation, her family’s charitable foundation, over the tens of millions of dollars it has accepted in donations from foreign governments and the corporate world while she was secretary of state.

“Hillary Clinton has perfected the politics of personal profit and even theft,” he said.

The property developer and reality-TV star said the Democratic candidate did not have the temperament or the judgment to be president of the US and portrayed her as someone who believed “she is entitled to the office,” turning her campaign slogan against her.

“Her campaign slogan is, ‘I’m with her’. You know what my response to that is? I’m with you: the American people,” he said to applause from supporters sitting in the front rows of his property in Soho, Manhattan, who sat ahead of a large group of reporters.

The businessman again made a direct appeal to supporters of Bernie Sanders, Mrs Clinton’s Democratic rival, to “join our movement” by repeating the Vermont senator’s attacks on her past support of “disastrous” trade deals, a popular target during her party’s primary.

Mr Trump’s scorching criticism of Mrs Clinton comes a day after she questioned his record in business during a speech in Ohio, a pivotal state in the November 8th election, noting that economists of all ideological hues argue that his policies would “throw us back in recession.”

Over two days and in these two speeches, the parties’ likely nominees drew clear battle lines for what is expected to be a brutal presidential campaign ahead: Mr Trump lambasting Mrs Clinton as a privileged insider, promising more of the same policies and proposing himself as an agent of change, while the former US senator cast the businessman as dangerous and temperamentally unfit, for both national security and the US economy.

Mrs Clinton poked fun at Mr Trump’s claims that he is qualified to be president because of his business record during her speech on Tuesday, in a thinly veiled reference to his Atlantic City casino companies filing for Chapter 11 bankruptcy.

“He’s written a lot of books about business. They all seem to end at Chapter 11,” she said.

One area where Mrs Clinton appears to be in a position of financial strength is in her campaign’s solid record of fundraising.

Mr Trump’s largely self-funded campaign is at a severe disadvantage to Mrs Clinton’s widely sourced fundraising efforts, according to the latest Federal Election Commission filing. He raised $3.1 million (€2.7 million) in May compared with her haul of $27 million, bringing her total fundraising to $240 million over the campaign compared with Mr Trump’s $17 million, in addition to loans of $45.7 million that he has advanced to his own campaign.

The billionaire business mogul, who has long prided himself on financing his own campaign, sent his first fundraising email on Tuesday. It came a day after he fired his long-embattled campaign manager Corey Lewandowski in a purge led by the property tycoon’s daughter Ivanka and her husband, Jared Kushner.

Mr Lewandowski had spearheaded Mr Trump’s remarkable victory in the Republican primary campaign but he came under fire as the billionaire has consistently trailed his Democratic rival in head-to-head polls. A CNN/ORC poll on Tuesday gave Mrs Clinton a 47 per cent to 42 per cent lead over Mr Trump with just one in five registered voters saying that they could change their minds between now and November.