At the Democratic caucus in Johnston, one of the wealthiest suburbs of Iowa’s capital Des Moines, supporters of the different candidates divide up into designated areas of a large room. Video: Simon Carswell 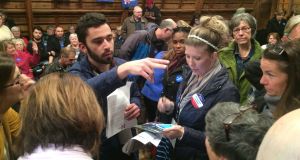 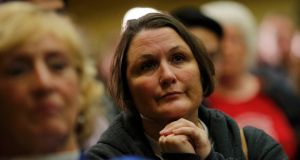 “Come on over here, I’ll give you some ice cream,” says a Martin O’Malley supporter, trying to encourage a Bernie Sanders man to defect to the long-shot candidate to keep him in contention.

The Democratic caucus in Johnston, one of the wealthiest suburbs of Iowa’s capital Des Moines, is in full swing.

The caucus is the elaborate and intimate electoral dance of the American democratic process where the supporters of the different candidates divide up into designated areas of a large room.

They are then counted and if one candidate doesn’t make a 15 per cent quota of all voters, the horse-trading begins among the supporters of the viable candidates to woo others over. At least two Iowa precincts in the counts on Monday night were determined the winner by a coin toss, reflecting the deep divisions within the Democratic Party.

The tug-of-war on display on Monday evening at the Simpson Barn, a renovated barn in Johnston, Polk County, reflects the wider pitchfork battle between the once presumed Democratic nominee Hillary Clinton and insurgent Bernie Sanders.

The fight between them here was over the supporters of former Maryland governor Martin O’Malley who was not deemed viable in this caucus and across Iowa, prompting him to end his presidential bid as votes were still being counted.

“You are not viable!” shouts a Hillary supporter from the packed corner of the room. There 139 out of the 254 Democrats have gathered in support of the former US secretary of state.

“We can add!” shouted an O’Malley supporter back as the candidate’s precinct leader addressed the 31 supporters standing in the former Baltimore mayor’s corner.

A Clinton precinct leader then tries hard to convince an O’Malley supporter to consider Hillary over Bernie.

“She doesn’t care about the environment, she takes money from Monsanto, ” says the O’Malley man, shaking his head in disgust at her support for the genetically modified organisms biotech company. “Hillary does not approve GMO labelling – Bernie does.”

The O’Malley camp eventually draw three supporters from the Sanders camp in a bid to reach the 39-supporter viability threshold but Clinton’s camp is unwilling to give up a further eight required.

“I don’t think so,” said her precinct leader.

Eventually it’s every man and women for themselves.

“When the count comes, we will hold strong at 31 and then y’all are free to make up your own minds as you see fit,” says Greg Hauenstein, the O’Malley precinct leader, addressing the supporters.

Eighteen O’Malley supporters eventually jump ship to Sanders. A Clinton supporter is working hard on Kevin Harris (38) trying to convince him to shift his preference.

“There’s no way that we can let one of these Republicans in. I am a Bernie fan but I don’t think he is electable,” she tells Harris.

He eventually gives in.

“It did take a while to move over,” Harris tells The Irish Times afterwards. “I like a lot of what Bernie Sanders has but I am not sure he can make it happen without Democratic control of the House and the Senate so I am Team Hillary now.”

After votes are counted, Clinton’s 145 and Sanders’s 106 convert into five and four delegates to be counted in the state-wide ballot, contributing to Hillary’s eventual razor-thin 0.2 point win over Bernie.

Hauenstein and his wife Emily Holley are the only two O’Malley supporters who do not shift allegiance. Why?

“The warm and fuzzy answer is I wanted to stick around for my guy,” he said.

Almost every Clinton supporter cites her experience as the reason for backing her.

“I thought she did a good job the first time around,” jokes Iowa electrician Terry Pohlman about her presidency, as he sees it, during her husband’s time in the White House.

A 15-minute drive away, at a party for the other national frontrunner Donald Trump, his supporters are upbeat his second-place finish in Iowa will not derail his chances of winning the Republican nomination.

“The past couple of Republicans that won Iowa didn’t win the White House so this is a good sign,” said Cathy Erdoesy (52), who works in human resources in West Des Moines.

The prospect of a Trump presidency terrifies Democrats.

“Are you from The Irish Times?” asks one man at Johnston’s Democratic caucus, hearing the accent. “If Trump ends up winning, will you sponsor a ship from here? I spent some time in Ireland and wouldn’t mind going back there for four years.”