Chris Christie ‘not moving an inch’ on Ebola policy 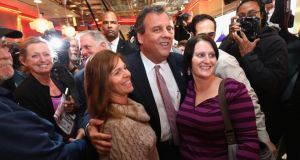 The Republican governor of New Jersey Chris Christie has refused to budge on his much- criticised decision to place health workers returning from treating Ebola patients in west Africa in mandatory isolation, in a defiant move that puts him at loggerheads with the White House.

Mr Christie, whose high- profile stand on the virus put him once again into the national spotlight, defended the forcible quarantining of nurse Kaci Hickox (33) after she returned from Ebola-affected Sierra Leone last week, saying that once she tested negative for the disease she was released to Maine from a tent in Newark where she was held.

The tenacious governor, who has a reputation for verbally lashing his critics, said his responsibility for the public safety of the people of New Jersey trumped the public welfare of the nurse. He defended the state’s 21-day quarantine on health workers returning from Liberia, Sierra Leone and Guinea, the African countries worst hit by Ebola.

Under new US government health rules medics returning from the countries will be monitored but not placed in quarantine, a position directly at odds with the New Jersey rules set by its governor.

Today President Barack Obama weighed in on the issue, saying that policies adopted in the US should not discourage Americans willing to fight the outbreak in west Africa. He also made an implied criticism of New Jersey’s approach.

“We don’t want to do things that aren’t based on science and best practices because if we do then we’re just putting another barrier on somebody who’s already doing really important work on our behalf,” Mr Obama said.

The US response to the Ebola crisis has become an unexpected issue in the campaigns for next Tuesday’s midterm elections when voters will decide 36 Senate races to determine whether Republicans will win control of Congress for the first time in eight years, a scenario that appears likely.

The Democratic governor of New York Andrew Cuomo, another potential presidential candidate in two years’ time, introduced a similar quarantine for returning health workers but he quickly backed down under pressure from the Obama administration.

As a potential “red” presidential contender in a traditionally “blue” Democratic state, Mr Christie has to balance his policies to maintain the support of moderate Republicans and independent voters.

The Republican governor’s bear-hug embrace of the Democratic president after Hurricane Sandy in 2012, shortly before the presidential election, alienated him from die-hard Republicans and his decision to release Ms Hickox drew fire again from conservatives.