Childish enthusiasm for St Patrick’s Day, the big day of the Irish 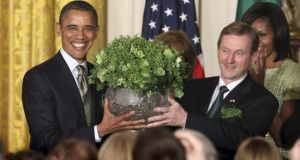 US president Barack Obama receiving a bowl of shamrock from Taoiseach Enda Kenny during a St Patrick’s Day reception at the White House in 2012. The two men will meet again in Washington on Tuesday. Photograph: Chris Kleponis/Reuters

From afar it is easy to be cynical about the green beer and tweed caps of the celebration of St Patrick’s Day in the United States, but that cynicism is challenged by the very American enthusiasm that has even those with no Irish roots keen to embrace our national holiday.

“It’s the day when everyone celebrates us, isn’t it Mum?” an excited Amy Rose Carswell (4) said to Vanessa the other day.

That was in contrast with the tantrum last year when Amy fell brokenhearted on the footpath unable to complete the walk back home from school because she was “American now” and Mum, Dad and sister Kate were “Irish”.

The influence of her American friends over two years living in the US is hard to overstate. One friend warned her about tornados last year.

She recites the Pledge of Allegiance in a strong American accent, having learned it so well from hearing volunteers announcing it every day over the school PA system during morning notices. Thinking it’s “one Nation under guard” (which isn’t inaccurate) and “in windy and justice for all” (also not entirely inaccurate, politically speaking), Amy likes to wrap it up with “Please be seated”, though she told me recently that she knows it wasn’t part of the pledge.

Despite these strong displays of patriotism to this foreign windy country, Amy this year became much prouder of being Irish. The supermarket Trader Joe’s was selling Irish daffodils imported from home this week and Amy insisted on marching in front of her mother with the flowers held high in the air so that everyone would see them and “know we are Irish”.

When her teacher announced on a field trip last week that there were dances from all over the world and that they would be seeing Irish dancing next, her classmates got excited and started shouting “That’s where Amy’s from.” She was suitably chuffed with the attention.

The understanding of nationality among children is fascinating in such a melting-pot country, where the schools celebrate so many different national cultures. Amy’s interactions with her class offer a glimpse of what child immigrants experience in the US and the benefits of their inclusion in the country under laws such as the Development, Relief and Education for Alien Minors (Dream) Act that gives legal status to those brought illegally to the US as children by their parents.

It is this kind of legislation that allows hyphenated Americans to grow up as so-called “Dreamers” and retain the culture of their native country while at the same time embracing their new home.

This weekend shops across the US are filled with Irish-themed paraphernalia – green shamrocks, beads and party hats. A Washington DC supermarket was selling “Blarney Scones”, while our local pizzeria was doing a happy hour pizza and drinks with leprechaun money.

Legislators in Georgia, where Savannah hosts one of the biggest “St Patty’s Day” parties in the country, passed a Bill permitting bars to sell alcohol on Sunday afternoons during the St Patrick’s Day week. And the Peruvian dancers are likely to appear again in the annual parade tomorrow in the US capital. This is, after all, the day when everyone can claim to be a little bit Irish. About 40 million Americans do.

The occasion brings important political access again. Vice-president Joe Biden will host Taoiseach Enda Kenny at his residence in the Naval Observatory on Tuesday morning before Kenny meets President Obama in the Oval Office ahead of the shamrock-giving ceremony in the late afternoon.

In between their meetings, Kenny will attend the traditional annual lunch hosted by the Republican Speaker of the House of Representatives, John Boehner, at the US Capitol. This is one of only two annual events in the political calendar when the president travels down Pennsylvania Avenue to the Capitol. In previous years, Kenny has sat between Boehner and Obama at the event.

Given the tensions between the two, most recently over the invitation to Binyamin Netanyahu to address the US Congress on the dangers of Iran, the Taoiseach may have to serve as peacemaker.

The Taoiseach’s US visit began yesterday in Atlanta. He heads to Austin, Texas tonight. His government is covering many American states, with seven ministers visiting 15 cities this year, including Minister for Foreign Affairs Charlie Flanagan, who will attend an Irish America magazine event lunch to honour Hillary Clinton on Monday. This is an important occasion given Clinton’s likely run for the presidency in 2016 amid talk that she might announce her candidacy next month.

Irish politicians will be pressing the plight of the illegal Irish again in meetings here next week. It will be against strong resistance from Republicans, who say Obama is acting illegally with executive actions to protect millions of so-called “undocumented” migrants, including hundreds of thousands more migrants brought to the US as children.

Some of those children might be making “leprechaun traps”, home-made snares to see if they can catch one overnight, getting swept up with so many others across this country celebrating everything Irish.