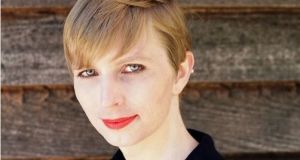 US army private Chelsea Manning has revealed her new look as a woman after being freed from a Kansas military prison and a 35-year sentence for leaking classified materials.

The transgender soldier, formerly known as Bradley Manning, took to Twitter and Instagram on Thursday, posting a portrait photograph of her with short-cropped hair, bright red lipstick and a dark outfit with a plunging neckline.

The 29-year-old, from Oklahoma, included the caption: “Okay, so here I am everyone!!”

Manning was released early on Wednesday from confinement at Fort Leavenworth in Kansas, having served seven years behind bars for giving classified materials to anti-secrecy website WikiLeaks.

Manning and her lawyers have refused to divulge her post-prison whereabouts or immediate plans.

1 Transmission of Covid-19 on flight into Ireland linked to 59 infections
2 Covid-19: Public urged to ‘stay at home’ as 1,025 further cases confirmed in State
3 Doctors are being asked to ‘play God’ in deciding who to give flu vaccine to – GP
4 President signs Bill on mother and baby home records into law
5 Couple found guilty of murdering Irish dancer with ‘devil’s breath’ drug
Real news has value SUBSCRIBE