Trump and Cruz, Clinton and Sanders battle for top spot in midwestern state 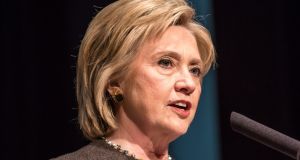 Democratic presidential candidate Hillary Clinton speaks at a campaign event at the Jewish Federation of Greater Des Moines on in Des Moines, Iowa. “We need a president who understands and can do all parts of the job,” she said. Photograph: Brendan Hoffman/Getty Images

More than a dozen candidates will make last pitches to Iowans, criss-crossing the state to appear at rallies and town hall meetings in an effort to convince voters to pick them in next Monday’s caucuses.

On the Republican side, businessman Donald Trump and Texas senator Ted Cruz are engaged in a hard-fought battle to come first in Iowa, while a second tier of candidates including Florida senator Marco Rubio and former Florida governor Jeb Bush, are hoping to finish a strong third to give them momentum in subsequent states.

Mr Trump, boasting about his insurgent campaign and his loyalty among voters angered by the Washington establishment, said at a campaign rally in Iowa on Saturday that his presidential bid would not suffer even if he shot someone on a crowded street.

“I could stand in the middle of Fifth Avenue and shoot somebody and I wouldn’t lose voters,” the party’s front-runner said.

A Fox News poll released on Sunday gave the billionaire an 11-point lead over Mr Cruz among Republican Iowans likely to vote.

Victory in Iowa may not lead to the Republican nomination – Mike Huckabee and Rick Santorum won here in the last two election cycles but faded in later states – but the caucuses narrow the field.

Hillary Clinton, the one-time presumptive Democratic candidate, is locked in a tougher than expected fight in Iowa with self-proclaimed democratic socialist Bernie Sanders.

He has made the first race more competitive with a campaign that is tapping a frustration with mainstream politics and an economy “rigged” against the middle class.

Mr Sanders, who continues to draw large crowds preaching against Wall Street and a corrupt campaign finance system, leapfrogged Mrs Clinton to lead in the two most recent polls.

This has put the former secretary of state on the offensive. She has attacked her rival on foreign policy and healthcare, arguing that she is more electable, more pragmatic and better prepared to be president.

“We need a president who understands and can do all parts of the job,” she told a Jewish group in Des Moines.

A victory for the Independent Vermont senator in Iowa could consolidate his lead in New Hampshire, which holds the second nominating contest eight days later, and extend the party’s primary for months, hurting Mrs Clinton’s prospects in the November election.

President Barack Obama, whose strong finish in Iowa in 2008 all but ended Ms Clinton’s first presidential bid, acknowledged how Mr Sanders’s populist outsider message has given him an edge.

“Bernie came in with the luxury of being a completely long shot and just letting loose,” Mr Obama told the Politico news website.

Asked whether Mr Sanders reminded him of himself in 2008, Mr Obama said: “I don’t think that’s true.”

Man tested for symptoms linked to coronavirus in Belfast 19:19
Greece urged to evacuate ill children from refugee camp 18:58
Serbia and Kosovo urged to compromise in bid by US to end impasse 18:53
Netanyahu denounces Iran as anti-Semitic at Holocaust forum 18:35
Actor alleges Weinstein raped her: ‘I couldn’t fight anymore’ 18:03