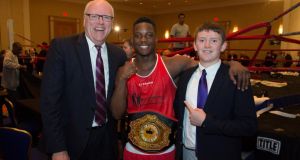 Jason Bell and his identical twin brother got into so many fights at their elementary school when they were seven that their father told them: “If you’re going to fight in school, you are boxing.” He enrolled his sons in No “X” Cuse Boxing Club, in Capitol Heights, Maryland, a tough neighbourhood in the suburbs of Washington DC.

Bell now has ambitions to compete at the Olympics and the World Championships. He trains five days a week for three hours each evening.

“I got a sharp mind,” says the well-built 18-year-old with swagger as he shadow boxes before his fight. “I don’t like to get in trouble.”

Bell, a middleweight fighter, is one of 20 boxers – 10 from Washington DC-Maryland, 10 from Northern Ireland – who fought in last Saturday’s Annual Belfast-Beltway Boxing Classic, a charity that brings together young boxers from both sides of the community in Northern Ireland with boxers from economically disadvantaged areas around the US capital.

“Boxing saves a few kids’ lives,” says Lamont Roach snr, a coach at Bell’s club. “It gives them an outlet – their grades improve dramatically. Without it, there would be gangs, drugs – being in the wrong place at the wrong time. Some don’t have fathers or role models. We try to give them that.”

The Northern Irish boxers travelled to Washington DC to fight 10 bouts at a “ballroom boxing” event last Saturday at the Marriott Wardman Hotel, in Washington, in front of several hundred paying guests.

Among the audience was Kevin McBride, the Boston-based heavyweight boxer from Clones, Co Monaghan, who beat Mike Tyson in July 2005 in the last fight of Tyson’s professional career.

A reciprocal visit to Northern Ireland will take place later in the year for the US boxers.

“It is more about the cultural exchange,” says Emanuel Quinn, who organises the event with Billy Tranghese, spokesman for Massachusetts Congressman Richard Neal, a long-time supporter of Irish causes. Originally from the Ardoyne in north Belfast, Quinn has lived in the US since 1989 and has been bringing Northern Irish boxers to Washington for seven years. “This gives them the opportunity to see the world, to see something different, and gives them something to strive for,” he says.

The idea for the project grew from a boxing gym that Quinn’s father and friends reopened in the Ardoyne, in 2003. The suicide rate in this area of Belfast was one of the highest in Britain or Northern Ireland, and they felt the young men in the area needed some purpose in their lives.

Quinn’s thinking is that boxing if teenagers can get up to train in the morning for their boxing, it can teach them discipline to get up for school.

Jordan Chambers (17) boxes with the Sacred Heart Boxing Club, in Newry, Co Down, and has won a junior Irish national title. He has ambitions to win a senior title and to fight at the European and World Championships, as well as the 2020 Olympics in Tokyo.

At last weekend’s boxing classic, before fighting and winning in his 48kg category, he said he studies two days a week, works as a carpenter three days and trains five nights. Life would be very different without boxing, he said.

“I would be messing about with my friends – some of them would be smoking and drinking, and going down the wrong road. If I didn’t have the boxing, I would be doing the same,” he said.

Career paths Among past Beltway champions, Deonte Washington, who trains at the Diamonds N The Ruff boxing club, in District Heights, Maryland, is excelling at his high school in northeast Washington DC and wants to study physics at Massachusetts Institute of Technology. “We try to set them up on career paths and educational paths,” says Tony Johnson, one of Deonte’s coaches at the club. “We view other avenues apart from boxing.”

The exchange between the North and Washington DC is far more than just fighting in a ring, says Johnson.

“It’ll be the first time they have been on a plane or out of the country. It shows them there is more than just their own little neighbourhood. They can say they know two or three guys from Belfast and the Irish kids can say they know some kids in America and in Washington DC, the capital city.”