Berkeley survivor Aoife Beary: ‘I miss my friends so much’

Aoife Beary, who suffered severe injuries when a balcony collapsed in Berkeley, and her mother Angela testify to the Assembly Appropriations Committee to pass Senate Bill 465 in Sacramento, California. 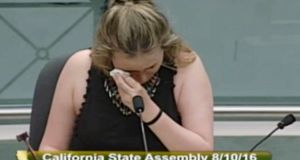 Aoife Beary, who was injured when a balcony collapsed in Berkeley, testifying to the Assembly Appropriations Committee to pass Senate Bill 465, in Sacramento California.

Aoife Beary who survived the balcony collapse in Berkeley, California, last summer has told a US state committee hearing her birthday would forever mark the anniversary of the death of her friends.

In a highly emotional testimony, she told California politicians she could never have imagined how her summer would have ended when tragedy struck on the night of her 21st celebrations.

“I miss my friends so much. I have known them since we started school together at four years of age,” she told the State Capitol Assembly Appropriations Committee on Wednesday.

“We had grown up together. And now my birthday will always be their anniversary.”

The collapse killed six students, five of whom were on J1 visas from Ireland. The Senate hearing on Wednesday morning was part of a legislative process to adopt new laws that would bring greater transparency to building contractors who had poor safety records.

The families of those who were killed and injured in San Francisco, as well as the Irish Government, have pledged their support.

“I am a survivor of the Berkeley balcony collapse that happened at my 21st birthday party,” Ms Beary said as the opening witness in support of Bill 465 which was introduced in response to the tragedy.

“My friends and I were so looking forward to our summer in Berkeley. We had already travelled a lot and spent our summers together in Vancouver, Thailand and Vietnam since we had started college. I could never have imagined how it could have ended.”

Ms Beary said her severe injuries had prevented her from returning to college. As a result of the fall, she had suffered a traumatic brain injury and had undergone open heart surgery. She told the hearing she had suffered broken arms, hands, pelvis and jaw. She lost teeth and had lacerations to her liver, kidney and spleen, a collapsed lung and broken ribs.

“None of this needed to happen. Some of my injuries will be with me for the rest of my life,” she said.

She said she had lost a lot of her independence and her career goals had been stopped as she could not complete her final year or indeed to return to college.

“My life has changed forever. I cannot believe why you are even debating this Bill. People died.”

She said all balconies needed to be scrutinised to ensure the same tragedy could not take place again.